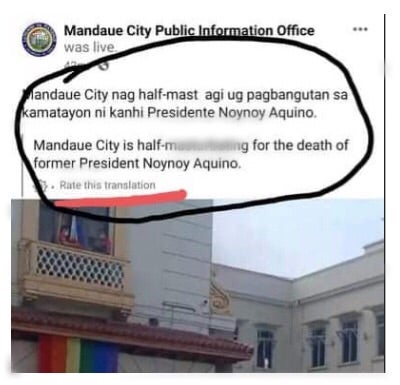 MANDAUE CITY,  Philippines — Facebook has issued an apology to the Mandaue City government on Saturday, June 26, 2021, for the mistranslation of the word “half-mast” in a caption of a Facebook live of the Mandaue City Public Information Office on Thursday, June 24.

According to an FB post of the  Mandaue PIO, a Facebook representative called Lawyer John Eddu Ibañez, Mandaue City Information Officer, on the phone and stated that the lapse was due to an isolated error by Facebook’s auto-translation technology.

The FB representative, who is the head of FB’s Public Policy of the Philippines, said that they had made efforts to prevent the incident from happening again and had sent their deepest regrets on the unfortunate incident which happened on the occasion of the death of a former president.

The Facebook mistranslation incident happened on June 24, 2021, when the Mandaue City PIO did a Facebook live on the city government placing the flag at the Mandaue’s Presidencia at the Mandaue City Hall at half-mast to join the country in mourning the passing of former President Benigno “Noynoy” Aquino III.

Half-mast is defined by Oxford Languages as the position of a flag, which is flown some way below the top of its staff as a sign of respect for a person, who has died.

But apparently, Facebook has a different kind of translation of the word “half mast” and the Facebook translation has been creating a buzz online. 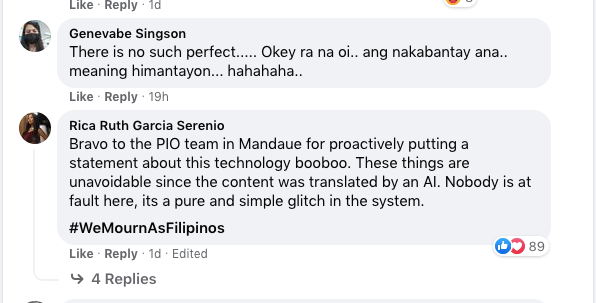 One of the many people who reacted to this lost in translation error of Facebook was Mandaue City’s administrator Jamaal James Calipayan who posted his dismay on his Facebook account. 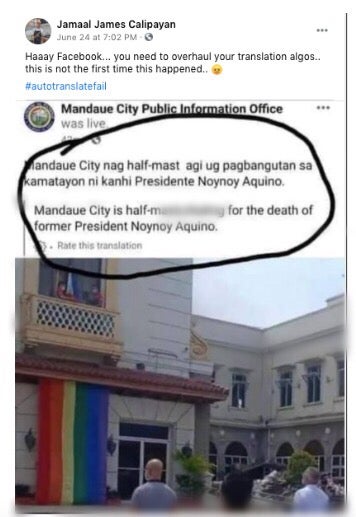 And after, Facebook apologized for the erroneous translation of its auto-translation technology, the Mandaue PIO decided to move forward from this incident.

“Cognizant of the fact that technology remains imperfect, we chose to move on from this circumstance. Your Mandaue City Public Information Office remains committed to its mission to provide every Mandauehanon with relevant and up-to-date information keeping in mind the age-old saying that “Democracy does not work, unless the people are informed”, the Mandaue PIO post on Saturday, June 26, read.

8 memorial sites for PNoy put up in Cebu