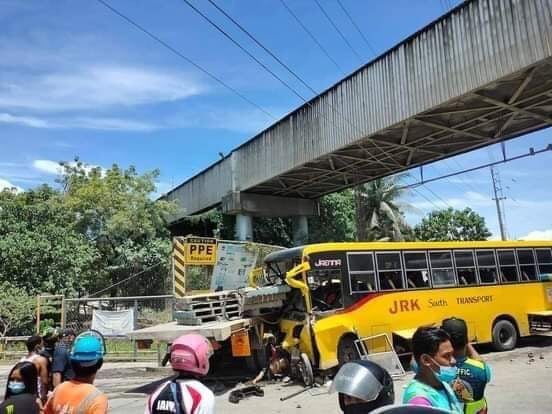 A couple onboard a motorcycle died after a mini bus rammed them from behind crushing them between the bus and the trailer truck. killing them. The accident happened before noon today, along the national highway in Barangay Tinaan, Naga City. | Photo from Clicky Shots

CEBU CITY, Philippines — A beach outing of a couple ended in tragedy when on their way home a minibus slammed into the motorcycle they were riding on from behind before the bus collided into a trailer truck before noon today, June 27, in Barangay Tinaan, Naga City in southern Cebu.

The couple, Julian and his wife Perelyn Dosdos of Capitol Site, Cebu City and both on their 40s, died on the spot after they were crushed between the bus and the trailer truck, said Police Master Sergeant Jake Catane, Naga City Police Station investigator, in a phone interview with CDN Digital.

Catane said that the couple were on their way home from an overnight outing at a beach resort in Barangay Langtad, Naga City when the tragic accident happened.

Investigation showed that the couple, who were on a motorcycle, stopped at the road as a trailer truck assisted by a traffic aide made a left turn.

The bus driver Boro of Barangay Balungag in San Fernando town told police that he was not driving fast, but he lost his brakes causing the accident.

Catane said that they had yet to verify Boro’s claims of losing his brakes and not driving fast.

Catane said that it took at least 30 minutes for the emergency responders to retrieve the bodies of the couple between the bus and the trailer truck.

Aside from the fatalities, Catane said that 11 of the 20 bus passengers were slightly injured and were brought to the hospital for treatment.

They were, however, released after they were treated of their injuries.

The trailer truck driver was not detained because he was not at fault in the accident, said the San Fernando policeman.

Catane said that Boro, the bus driver, however, was detained at the Naga City Police Station detention cell, pending the filing of Reckless Driving resulting to Homicide charges.

Catane said the family of the victims were willing to file a complaint against Boro.

One killed, five others injured in vehicular accident in Bogo City