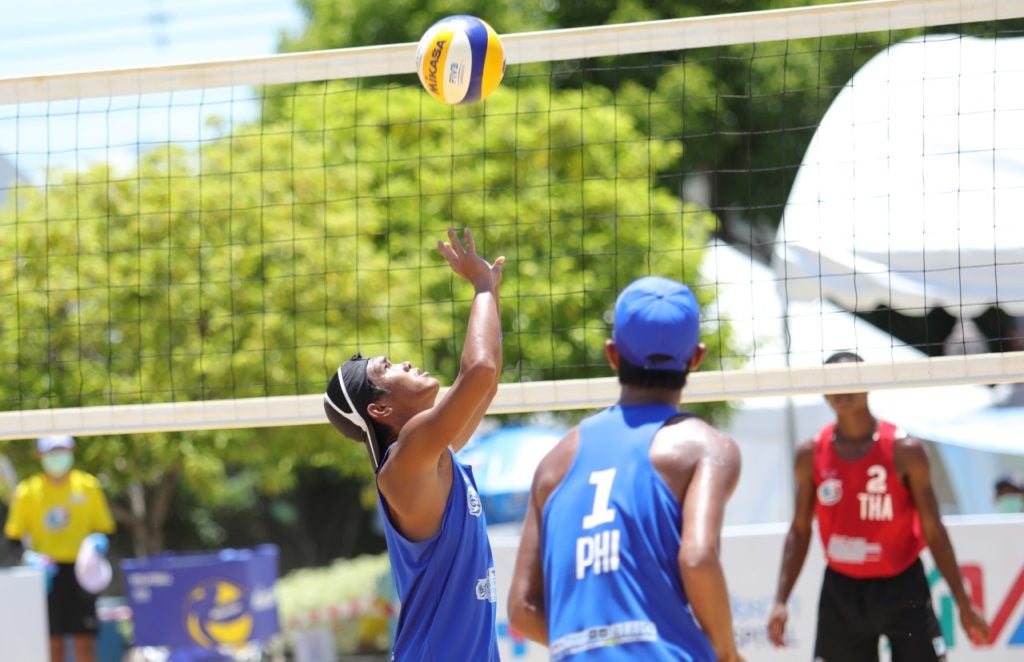 Alexander Iraya sets the ball as his teammate, Jayrack Dela Noche looks on during their match against Thailand team one in the ongoing Third Asian U19 Beach Volleyball tilt in Thailand. | Contributed Photo

CEBU CITY, Philippines— The duo of Jayrack Dela Noche and Alexander Iraya of the Philippine National Volleyball Federation (PNVF) bowed down to Thailand’s team one,18-21,15-21, in the ongoing Third Asian U19 Beach Volleyball Championships on Sunday, July 4, 2021 in Nakhon Pathom, Thailand.

Dela Noche and Iraya who are both new to an international competition, lost to the host team’s pair of Netitorn Muneekul and Wachirawit Muadpha in their opening match.

However, the Thais were given a good fight before Dela Noche and Iraya lost to them. The Filipino pair gave the top-seeded Thais everything they had in the opening set and even led, 15-13, before the hosts recovered their bearing with solid plays.

Dela Noche and Iraya who are both from Victorias City, Negros Occidental kept the game close in the second set, before Netitorn and Wachirawit pulled away with a 17-12 advantage and never looked back.

With the victory, Thailand’s team one clinched the quarterfinals berth. They also defeated Iran team two’s Amir Reza Zamani and Armin Kami, 21-12, 19-21, 16-14, in a thrilling opening match last Saturday, July 3, 2021 in Pool A.

Dela Noche and Iraya, who are the eighth seed in the 13-team tournament, have to defeat the ninth seed Iran in their final elimination round match tomorrow, Monday, July 5, 2021, if they want to proceed to the next round.