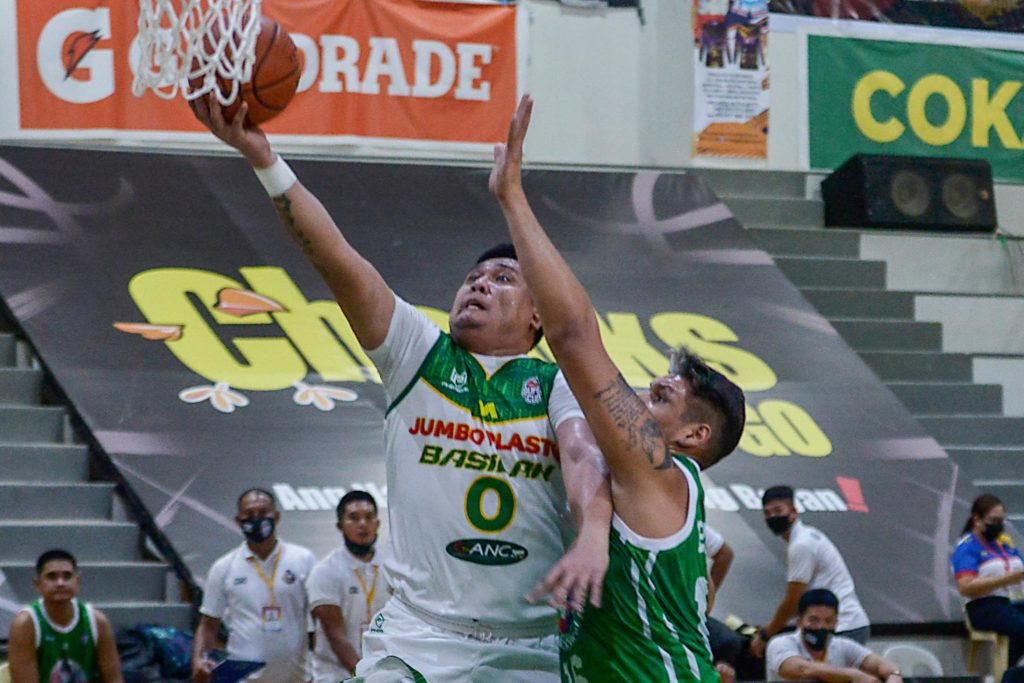 Jessie James Collado of the Jumbo Plastic-Basilan Peace Riders attempts a layup in a game against the Petra Cement-Roxas Vanguards that was cancelled due to safety reasons. | Photo from VisMin Cup Media Bureau

CEBU CITY, Philippines—The league officials of the 2021 Chooks-to-Go Pilipinas VisMin Super Cup decided to cancel a Mindanao leg game between the Jumbo Plastic-Basilan Peace Riders and the Petra Cement-Roxas Vanguards at the Ipil provincial gymnasium in Ipil, Zamboanga Sibugay on Tuesday, July 13, 2021, due to safety reasons.

This is the second time the league officials were forced to cancel a game in the ongoing Mindanao leg action due to the dangerous  condition of the court’s floor.

A heavy downpour caused the court’s floor to get wet. The halftime break took a lot longer because the league tried to address the floor issues by mopping all they could.

But just 45 seconds into the second half, Peace Rider Michael Juico slipped and was slow to get up.

The game was stopped at the 9:15 mark of the third quarter with the Vanguards ahead by one, 40-39.

The two squads agreed to play with two terms.

The first was that if anyone slipped once more, play would be stopped.  The second term was if the game would be halted, the game would resume to the time and scoreline it stopped.

Last Friday, the tilt pitting Iligan-Zambo del Sur was also cancelled due to the same reason.

The Ipil provincial gym was the last minute go-to venue of the VisMin Super Cup league officials due to its more relaxed quarantine status compared to the original host of the Mindanao leg, Pagadian City, which is still under modified enhanced community quarantine until July 15.

All of the nine competing teams in the Mindanao leg have to travel from their billeting in Pagadian City to Ipil and vice versa every game.