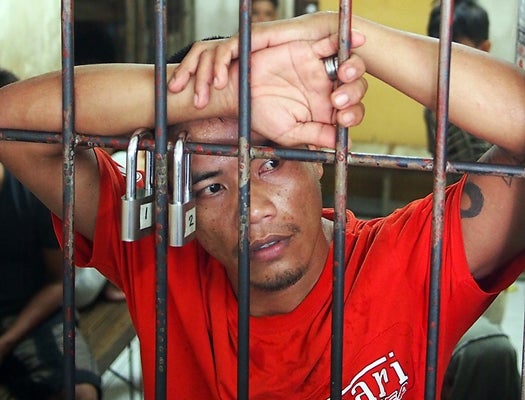 Rodulfo Caparoso, Jr. is now behind bars at the Liloan Police Station following his alleged involvement in the robbery of the Rose Pharmacy Pitogo Consolacion branch. (CDN PHOTO/CHRISTIAN MANINGO)

Not just one, but two drug stores were victimized by armed robbers on Monday.

At least three armed men pounced on a branch of Rose Pharmacy in barangay Pitogo, Consolacion town. The heist was carried out almost at the same time a Cebu City branch of another drugstore chain, ThreeSixty Pharmacy, was attacked by at least two men who used a motorcycle in their getaway.

Unlike the Cebu City robbery, the police in Consolacion town and nearby Liloan town managed to capture a suspect a few hours after the heist.

Rodolfo Caparoso Jr., alias Bulldog, was captured at around 5 p.m. in Liloan town with a loaded .357 cal. revolver and two sachets believed to contain shabu.

Caparoso was identified by witnesses, including a child who was playing outside the store, after they were shown his mugshots on file.

He denied the allegations and insisted he was at home all day.

Senior Insp. Frank Oriol, chief of the Consolacion police, said it was easy to identify them because the robbers didn’t cover their faces when they barged into the store. Two cohorts, lookouts, remain at large.

Police said two men who were armed with pistols barged into the drug store. One went to the cashier and held her at gunpoint and ordered the store’s manager, Carlos Alburo, to open the cash register. They fled on board a waiting motorcycle after taking the cash.

Oriol said security guard had not yet arrived for duty at 3 p.m and the store’s closed-circuit television camera was not functioning. He said an “inside job” may have been involved since the suspects apparently knew the flaws in the drugs store’s security.

Aside from the Rose Pharmacy heist, Caparoso will be facing car theft complaints. Victimized motorcycle owners in Liloan, Compostela and Consolacion have started turning up after learning of his arrest.

Caparoso admitted to CDN that he used to be involved in stealing motorcycles with a certain John Paul.

“I’m not happy that the incident happened. I’m just happy that my police are not sleeping on the job,” she told Cebu Daily News.

Senior Supt. Noli Romana, chief of the CCPO, said they may have to do that as a 48-hour deadline for his men to capture the two is about to lapse without any solid leads.

The CCPO formed nine tracker teams to hunt down Rama and his cohorts whom they also linked to last week’s robbery of an LBC courier outlet in Escario Street.

Supt. Romeo Santander, chief of the City Intelligence Branch, said they believe the robbers have already left the city and in hiding.

“We are pressured by the time frame but we understand why the city director gave us a deadline,” he said. /with Correspondents Rene F. Alima, Victor Anthony V. Silva and Chito O. Aragon