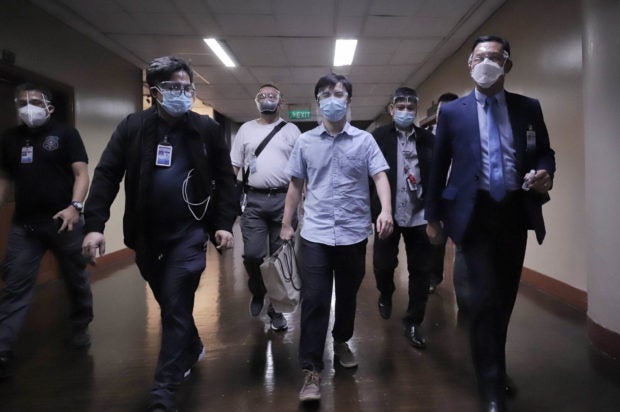 IN CUSTODY Pharmally director Linconn Ong (fourth from left) is escorted inside the Senate building for the resumption of the blue ribbon committee hearing on the firm’s deals with the government, where he was later ordered arrested for lying under oath. —SENATE PRIB PHOTO

MANILA, Philippines — The government bought about P550 million worth of expired COVID-19 test kits from Pharmally Pharmaceutical Corp. as part of the trading company’s supply contract with the Procurement Service of the Department of Budget and Management (PS-DBM), a disgusted Sen. Francis Pangilinan said on Tuesday.

Pangilinan said the government wasted the people’s money in paying for close to 400,000 COVID-19 reverse transcription-polymerase chain reaction (RT-PCR) test kits that were useless as they were past their expiry dates.

“This is like we are burning cash amid the many deaths,” he told the Senate blue ribbon committee.

The committee headed by Sen. Richard Gordon on Tuesday resumed its investigation of the allegedly irregular transfer of more than P42 billion in pandemic response fund from the Department of Health (DOH) to the PS-DBM. The undercapitalized Pharmally won P11.7 billion worth of contracts for medical supplies from that fund.

Pangilinan based the amounts he cited on the P69,500 price per pack of 30 to 50 test kits sold by Pharmally to the PS-DBM last year.

“DOH was requesting a rescheduling of the delivery of Pharmally testing kits because the test kits that were delivered expired [and] were not used,” Pangilinan said, citing a December 2020 letter from Assistant Health Secretary Nelson Santiago to Lloyd Christopher Lao, who was the head of the PS-DBM then.

According to Pangilinan, the inspection reports indicated that the test kits had an April 5, 2020, date of manufacture and an expiry date of Oct. 5, 2020, or just six months.

“Contrary to the technical specifications required by the DOH, Pharmally delivered a total of P5 billion worth of testing kits from May to September with a shelf life of six to 10 months,” Pangilinan told the Inquirer.

Pangilinan cited the PS-DBM’s own technical requirement document, issued on April 21, 2020, which directed suppliers to ensure that all test kits must be fresh stock and must have a shelf life of at least 24 months to 36 months from the date of delivery.

Health Secretary Francisco Duque III said that while the DOH did require that shelf life for COVID-19 test kits, manufacturers were giving a maximum of only six months.

“Because these testing kits were new, the manufacturers cannot say with certainty on the stability of the extraction kits for period longer than six to 12 months because of the lack of studies,” he said.

Pangilinan told the Inquirer that the private sector such as Go Negosyo and the Philippine Red Cross at about the same time bought test kits at $15 each but Pharmally priced it at $30.

Aside from the expired test kits, the PS-DBM also bought kits that were nearing expiry, which may have also been overpriced, he said.

Citing information from industry insiders, Pangilinan said test kits that had 12-18 months of remaining shelf life should be discounted by at least 10-15 percent and by 15-25 percent for those set to expire within six to 12 months. If the shelf life is less than six months, the discount should be about 30 percent or more, he said.

With a roughly 25-percent discount, the government would have saved an additional P1.25 billion, which could have been used to buy additional testing kits, Pangilinan said.

For face masks, Gordon said Pharmally obtained its supplies from another company, Tigerphil Marketing Corp., which got them from Greentrends Trading.

Greentrends sold face masks for P18 apiece to Tigerphil, which passed them on to Pharmally at P23.80 each. Finally, Pharmally charged the PS-DBM P28 per piece for a P2.9-million profit for a single transaction, the senator said.

Gordon had ordered the arrest of Pharmally director Linconn Ong for lying under oath in earlier hearings. Senate security officers took Ong into custody on Tuesday.

Sen. Risa Hontiveros was aghast that despite the controversies hounding the PS-DBM and Pharmally, both still have pending contracts to supply the DOH with personal protective equipment.

“This is turning out to be a continuing crime,” she said.

“All the red flags strongly suggest a criminal syndicate type of operations meant to corner billions of DOH COVID funds,” he told the Inquirer.

“The simple fact is that the blue ribbon committee has failed to produce anything to prove its accusation of corruption,” the President said in his Monday night televised address to the people.

Mr. Duterte said that the administration, particularly the DOH, had answered all the accusations and inquiries.

He pointed out that even the Commission on Audit (COA) did not claim that government money was lost to corruption and did not find any malpractices such as overpricing and ghost deliveries of pandemic supplies.

“If the committee thinks it has gathered enough evidence of corruption or malfeasance from its current inquiry, then by all means, bring your case to the Ombudsman or to the proper courts. Don’t swim around there every day. You are dragging everyone,” the President told Gordon.

Despite statements from the COA and other government officials, Gordon’s “partisan inquiry” continues, showing that it’s agenda is “clearly politics,” the President said.

“This is what you really want Dick, to destroy my name and [the reputation of] my administration and mess up the government’s COVID response because the elections are approaching. I don’t know if you are planning to run, I wish we could face each other off for a position, even a barangay chairmanship in your place,” he said. —WITH A REPORT FROM JEROME ANING INQ