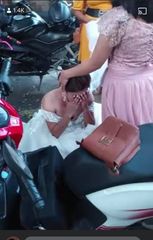 The bride cries in frustration outside the planned reception venue after learning that the wedding coordinator has allegedly duped them by not booking the reception venue and not paying the suppliers of the gown, flowers, photographer and videographer. Screenshot from Tonskie Elsisura

MANDAUE CITY, Philippines — A newlywed couple are amenable to settle their problems with the wedding coordinator, who allegedly ran off with their money for the wedding.

Cherry Pie Purisima, the bride, said that she and her husband Arniel Santingasin were willing to talk things through and settle things amicably with the wedding coordinator (name withheld) since their wedding, despite having no reception, had pushed through.

Purisima earlier said that she and her husband planned to report the incident about the wedding coordinator to the police.

However, later the couple learned that the wedding coordinator tried to take his own life in his rented apartment in Consolacion town and was rushed to the hospital for treatment.

This was confirmed by Police Staff Sergeant Arnold Rusiana of the Consolacion Police Police Station.

Upon learning that the coordinator was brought to the hospital after he attempted to take his own life, Purisima told CDN Digital that she and her husband were discussing if they would visit the latter to talk things out.

She said that they only wanted to know the truth as to why he did that to them while they also hoped that their money would be returned back to them.

Purisima said that they had already paid the P65,000 to the wedding coordinator.

She said that she contacted the wedding coordinator after a search at Facebook and read the favorable comments about him.

She said she initially had her negotiations with the coordinator in February this year, but started to give downpayments in the month of June until she paid the remaining balance of P3,800 on Tuesday, September 21, or a day before the wedding.

She wanted their money back even if it would only be paid in installments.

However, Purisima said that she and her husband were keeping their options open on reporting the incident to the police and had it blottered.

(We are thinking of having the incident blottered at the police station. We are still confused about it. But we will discuss this thoroughly because I am still confused on this. Because if if he did this to us, we still pity him because he might have his reasons for doing this. What he did to us, for all his actions there are always reasons for the actions. What we would have wanted though was just for him to contact us.)

When sought for comment, the wedding coordinator at his home by reporters, he asked that his privacy be respected and that he would settle his differences with the newlywed couple.

She said she cried in frustration outside the reception venue when she learned that this was closed because it was not booked to them.

She said she last saw the wedding coordinator earlier that day at her house while she was preparing for the wedding later.

She said that the wedding coordinator then asked to leave to buy wine for the reception and he never returned nor did he show up at the church.

Purisima said that they could not contact him anymore after that.

Jesson Argabio, a wedding videographer, said in a interview with a radio station, iFM, said that the photographer, Elsisura, who was his friend, was contacted by the wedding coordinator through Facebook two days before the wedding.

The photographer in turn, tapped Argabio to be the videographer.

Both of them were also not paid yet for their services.

“First time nako naka work [niya]…. Unfortunately na dimalas pajud,” he said, stressing that he accepted the offer after he found the coordinator’s previous weddings that were posted on his social media account successful.

Argabio said that he and Elsisura were not blaming the couple or dismayed by them, stressing that it was not them who negotiated for their services.

(Actually, we were not dismayed by the couple because first, they were not the ones who contacted us, it was the wedding coordinator. So we pity the couple on what happened on their wedding because the bride cried on her wedding day. Put yourself in the bride’s situation where instead of being happy because it was your wedding, you have to cry in frustration instead. And that is the ending of your wedding.)

Both the videographer and photographer said they would never again commit or accept any offer from that coordinator./With a report from Mary Rose Sagarino

WATCH: Viral video of bride crying in frustration after being ‘scammed’

NEWS Update: A woman claims she was allegedly victimized by wedding coordinator too

‘It’s a wedding, not a flower show’