Motorists dash for cash flying out of armored truck 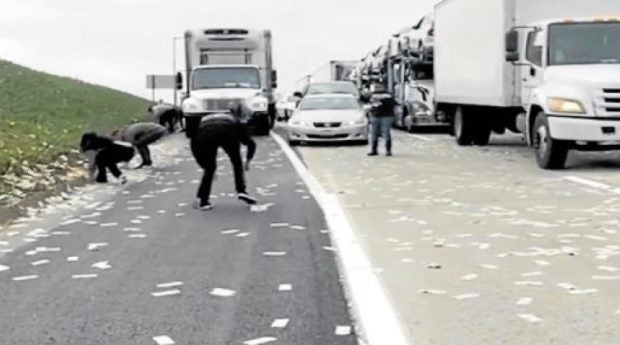 LOS ANGELES — An armored truck spilled huge wads of cash across a California freeway on Friday, prompting chaotic scenes as drivers stopped to scoop up banknotes.

But motorists hoping to line their pockets with an unexpected pre-Thanksgiving windfall were thwarted, as police cracked down and arrested two people.

“There’s a lot of video evidence of people stealing the cash from the freeway, picking it up,” California Highway Patrol Sgt. Curtis Martin told a news conference.

The money—of various denominations, totaling thousands of dollars—belongs to a bank and must be returned to a police station, he added.

The freeway free-for-all began after a door of the armored truck flew open near San Diego on the Interstate-5, which runs from California’s Mexican border all the way to Canada.

Video posted to social media showed people dashing around the roadway, scooping up cash and even throwing handfuls of greenbacks into the air in celebration.

“Have you ever seen this before?! What would you do?!” posted @demibagby on Instagram.

But police warned that the same footage would be used to track down anyone who does not swiftly hand over the cash.

“It’s better for them to do the honesty policy than to wait for us to track them down and knock on their door,” Martin said.

The two arrests were made after a man and woman who had joined the dash for cash accidentally locked themselves out of their car, blocking a lane and leaving themselves unable to depart the scene.