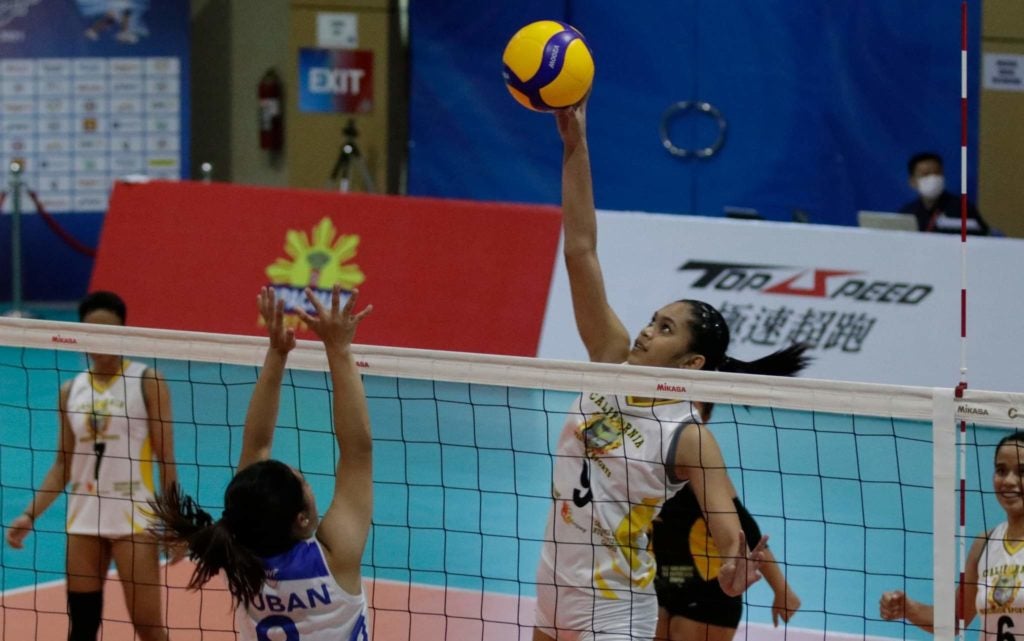 Cebuana spiker Caisey Dongallo towers above Baguio City’s defenders during their game against the Lady Highlanders in the PNVF Champions League. | PNVF Photo

The Antipolo City-based spikers bounced back from their second set loss and claim the victory in dominant fashion.

With the win, they climbed to fourth place in the six-team tournament with one win and three defeats.

“We could have done better,” said skipper Kizzie Madriaga after her teammates allowed Baguio City to steal a set before playing their usual game and snatch their first win in four outings.

The Baguio Lady Highlanders fell to 0-4.

Cebuana spiker Caisey Dongallo scored all but one of her 25 points on attacks and collected seven digs, Jelai Gajero added 16 points and eight digs and setter Madriaga tossed in 19 excellent sets for CPS.

Dongallo is a product of the vaunted Catmon Integrated School volleyball team of teacher/coach Vilma Veloso.

Handled by multi-titled high school coach Jerry Yee in a bubble training for a month, CPS was finally rewarded after putting up a gallant stand in its first three matches.

Those losses against professional clubs toughened CPS and Yee was the glue that kept the young crew together.

“He is so calm coaching us,” said Madriaga, referring to Yee.

“Our group’s dedication to the sport and its continuous precision training while in the bubble is paying off despite the pandemic,” said CPS owner Dr. Obet Vital, who hopes that some of the athletes could try out for next year’s Asian Volleyball Cup U17 and U19 competitions in Thailand and China, respectively.

CPS will go up against Petro Gazz tomorrow at 1:30 PM while Baguio City faces Chery Tiggo at 4 PM.    /rcg