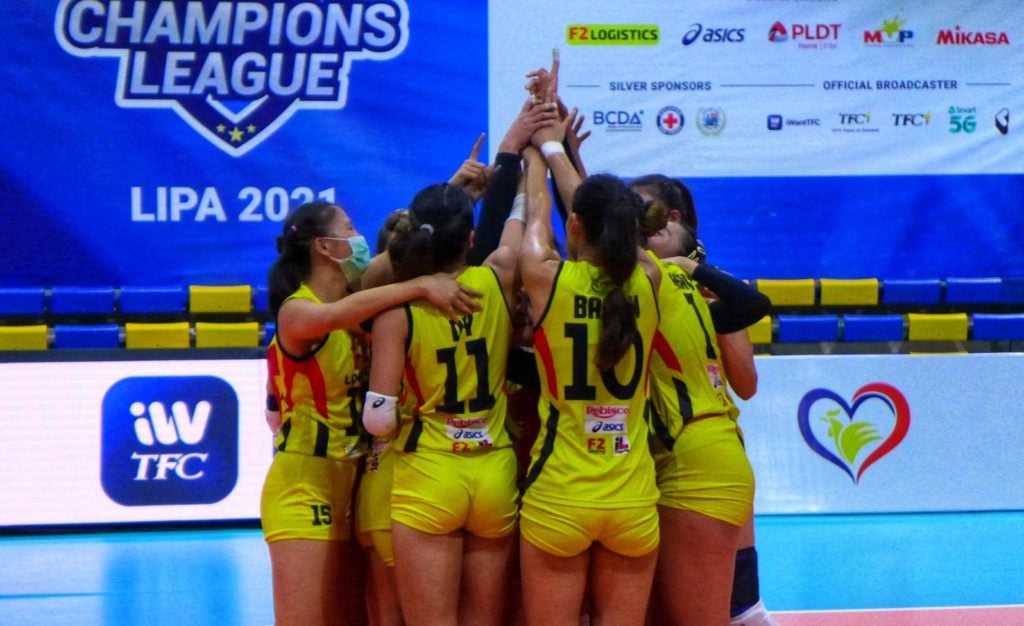 The F2 Logistics spikers whoop it up after their straight-set win against Chery Tiggo Crossovers, 25-20, 25-20, 25-22 in the finals of the Philippine National Volleyball Federation Champions League. | Photo from PNVF

The Cargo Movers, champions in the Philippine Super Liga (PSL), finished their campaign with a perfect, 5-0, (win-loss) slate.

Chery Tiggo, which missed Jaja Santiago who was playing in the Japan V.League settled for the silver medal.

Kalei Mau led the Cargo Movers with 16 points, 19 receptions, and nine digs, while Iris Tolenada, who was acquired by F2 Logistics only last month tossed 17 excellent sets along with four service aces, and one block.

Tolenada replaced Kim Fajardo who is currently nursing an injury.

The Cargo Movers’ put on a superb defense in the one-hour and 29-minute match with nine blocks— including three each from Majoy Baron and Kim Kianna Dy.

Dy was eventually named as the tournament MVP and Best Opposite Hitter.

Tolenada took the Best Setter award and Dawn Macandili, who tallied 13 digs on Thursday, was the competition’s Best Libero.

F2 Logistics coach Ramil de Jesus was satisfied with the victory despite their short preparation.

“I am very happy because it’s a first-ever national volleyball tournament title,” De Jesus said. “It feels so good.”

“The players are crying because this is the first time they played as a team after two years due to the pandemic.”

The Cargo Movers have not played in a tournament since March 2020.

“The advantage is that they have been together for a long time. Some of them also played in Thailand as part of the Philippine team,” added De Jesus.

Dindin Santiago-Manabat had 17 points for the Crossovers while Mylene Paat added 14 points and eight digs.