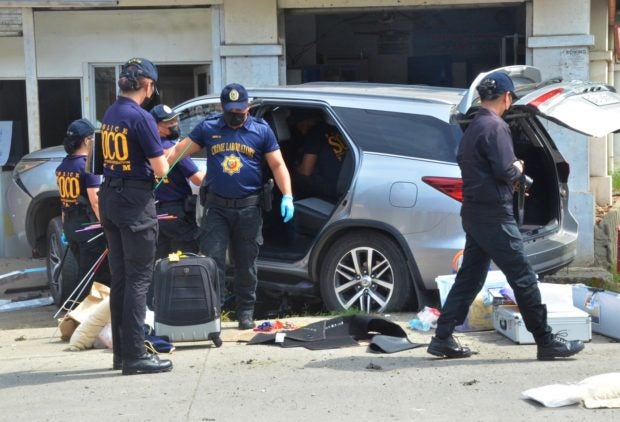 CAGAYAN DE ORO CITY – For a P150,000 bounty to be shared by four people, a prominent surgeon and urologist was recently shot and killed in this city, according to a confession of two arrested suspects.

The suspects were arrested on Friday, the day they were supposed to collect the promised sum, and some 17 hours after they committed the crime.

Dr. Raul Winston Andutan, 62, medical director of Maria Reyna-Xavier University Hospital (MRXUH), was alone in his SUV when he was shot dead in Barangay Nazareth at past 10 a.m. on Thursday.

Although wounded, he was still able to drive away from the attackers but eventually rammed a vehicle in front of a laundry shop, injuring a bystander.

A graduate of the UP College of Medicine, Andutan used to be president of the Philippine Urological Association (PUA), and examiner and member of the Philippine Board of Urology which accredits the urology training programs in the country and confers clinical competence to urologists after specialty training.

“The manner and gravity of this dastardly attack on one of our members marks a worrying escalation of violence. No cause can justify such brutality and senseless killing,” the PUA said in a statement.

On Friday, at around 3 a.m., police operatives swooped down on Barangay San Alonzo, Balingoan town, Misamis Oriental, some 88 kilometers away from here, and arrested three suspects, all residents of Bukidnon province.

In the safehouse where they stayed, authorities seized two loaded .45 caliber  pistols and a hand grenade.

Curiously, the suspects did not yield any mobile phone.

Rene Tortosa, whom Macarayo described as the primary suspect, eluded arrest. Tortosa is a resident of Balingoan where his family runs an eatery.

Several hours later, Felipe Tingabngab Entira, 63, was arrested in Balingasag town, some 37 kilometers away from Balingoan.

Maj. Evan Viñas, spokesperson of the city police, said Entira is also a suspect in the crime.

Interviewed on Friday by local broadcast station Magnum Radyo, Nacua admitted shooting Andutan while on board a motorcycle driven by Cabug.

According to Nacua, Tortosa, who served as lookout outside the home of Andutan, signaled to him that their target had already left his residence.

Alerted by Tortosa of the vehicle’s plate number, Nacua and Cabug then trailed Andutan until they found the chance to carry out the crime.

After the shooting, Nacua said he and Cabug motored towards a rented boarding house in Barangay Camaman-an and agreed to split up. Nacua said that he was the last to leave, traveling to Balingoan by bus at past 1 p.m. on Thursday.

On Friday, police recovered the motorcycle used as a getaway vehicle in the ambush, near the boarding house of the suspects.

Col. Aaron Mandia, city police director, told reporters that their landlord and several neighbors identified the arrested suspects as the ones renting the boarding house.

Nacua and Cabug separately told Magnum Radyo that the hit job was arranged by Tortosa whom they know to be an ex-Army personnel.

Tortosa also owned the Balingoan house where they stayed and the motorcycle, and also the pistols and grenade taken from them, Nacua added.

While claiming they did not know the mastermind, Nacua and Cabug said they were told by Tortosa that Andutan allegedly caused the death of a patient.

Both suspects said that they expected to be paid the bounty–to be divided to four people–on Friday.

An interrogation of the suspects revealed that Tortosa is the one in contact with the mastermind while the four arrested suspects carried out the plan, Viñas said.

He added that the suspects claimed to have been given P3,500 as operating expenses.

“One man’s shortcomings, whether real or imagined, is never reason enough to kill somebody, anybody.”

The Council for Health and Development also decried the killing. It said that Andutan “was known to his colleagues and patients as an excellent surgeon and a compassionate friend, father, and doctor.”

The MRXUH held a nine-day novena for Andutan starting on Dec. 3 at its chapel.

“We are forever grateful for his generous service, his caring presence to his colleagues, hospital personnel, and patients,” the MRXUH management said in a statement. (With reports from Divina M. Suson and Ryan D. Rosauro)