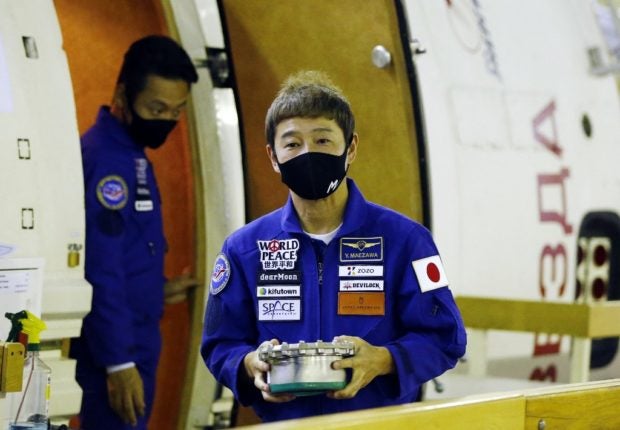 Space flight participants – Japanese billionaire Yusaku Maezawa (R) and his assistant Yozo Hirano – attend a training ahead of the expedition to the International Space Station, in Star City outside Moscow on October 14, 2021.  | Photo by SHAMIL ZHUMATOV / POOL / AFP

TOKYO — Japanese billionaire Yusaku Maezawa, who blasts off for the International Space Station (ISS) this week, is an irreverent space enthusiast who has made headlines for splashing the cash on modern art.

The 46-year-old tycoon is the founder of Japan’s largest online fashion mall and the country’s 30th-richest person, according to business magazine Forbes.

But he is far from the traditional image of a staid Japanese businessman, with more than 10 million people following his Twitter account, its handle a play on his first name: @yousuck2020.

And he’s a big spender, particularly when it comes to his twin passions: modern art and space travel.

He hit the headlines in 2017 when he forked out a whopping $110.5 million for Jean-Michel Basquiat’s 1982 painting “Untitled,” a skull-like head in oil-stick, acrylic and spray paint on a giant canvas.

It was a record price but Maezawa insists he is just an “ordinary collector” who buys pieces “simply because they are beautiful.”

On Dec. 8, he will become the first space tourist to travel to the ISS with Russia’s space agency Roscosmos since Canadian Guy Laliberte, cofounder of Cirque du Soleil, in 2009.

Maezawa will be accompanied on the 12-day mission by his assistant, Yozo Hirano, a film producer who will be documenting the journey for the billionaire’s YouTube channel and its 754,000 subscribers.

How much he has spent on his upcoming space adventure is unclear, as the price tag has been kept a secret.

But the cost is unlikely to make much of a dent in the $1.9 billion net worth the businessman is estimated to have accumulated through his firm, Zozo, which operates the hugely popular ZOZOTOWN online fashion site.

He arrived in Kazakhstan for space training in November, and has said he is “not afraid or worried” about the voyage.

He has solicited ideas for things to do in space and asking questions including: “Do you move forward when you fart in space? What happens when you play Pokémon GO in space?”

In Japan, Maezawa’s exploits are often fodder for gossip magazines, with a particular focus on his love life over his space exploits.

The ISS trip won’t be his last space odyssey, as the businessman has also booked out an entire SpaceX rocket for a trip around the moon scheduled for 2023 at the earliest.

Maezawa originally said he planned to invite six to eight artists on the trip, asking them to create “masterpieces (that) will inspire the dreamer within all of us.”

But in March, he announced that he was broadening the search beyond artists, and claims to have received one million applications for eight spots on the rocket made by Elon Musk’s firm.

As a young man, Maezawa had aspirations in the music world and was a drummer for a band named Switch Style, which made its debut in 2000.

But he began dabbling in business even before the band’s debut and has attributed Zozo’s success to the fact he and his staff are “doing what we enjoy.”

“The cycle repeats. The cycle of making dreams come true. We can even go to space,” he said.