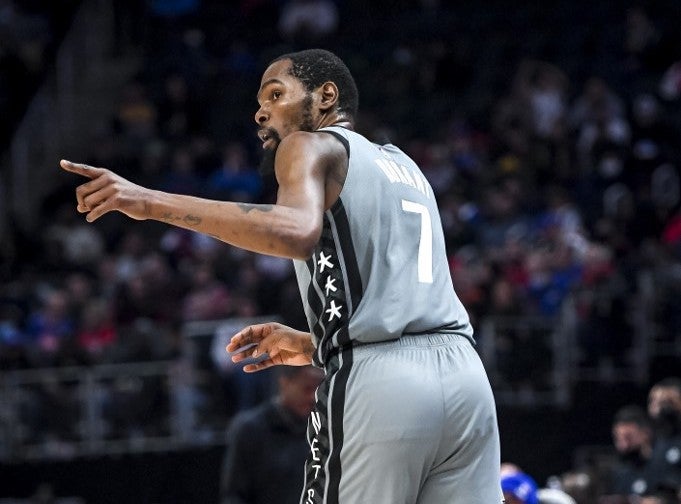 DETROIT, MICHIGAN – DECEMBER 12: Kevin Durant #7 of the Brooklyn Nets reacts after making a basket against the Detroit Pistons during the first quarter at Little Caesars Arena on December 12, 2021 in Detroit, Michigan. NOTE TO USER: User expressly acknowledges and agrees that, by downloading and or using this photograph, User is consenting to the terms and conditions of the Getty Images License Agreement. Nic Antaya/Getty Images/AFP (Photo by Nic Antaya / GETTY IMAGES NORTH AMERICA / Getty Images via AFP)

Durant added nine assists and seven rebounds as the Nets won for the third time in their last four games.

Patty Mills added 18 points and five assists for the Nets, while LaMarcus Aldridge had 15 points and Cam Thomas tossed in 13 for Brooklyn, which outscored Detroit 30-13 in the fourth quarter.

The Pistons learned earlier in the day that leading scorer Jerami Grant would miss at least six weeks due to a thumb injury.

Brooklyn led by as much as 13 in the first quarter but a Cunningham 3-pointer in the closing seconds cut the Nets’ advantage to 31-24.

Detroit briefly took the lead in the second quarter with a 16-1 run that included 10 points from Jackson.

Durant scored 12 points in the second quarter as Brooklyn rebounded to take a 60-57 halftime advantage.

The Pistons reeled off 12 unanswered points in the third quarter to take a 73-66 lead. Hamidou Diallo capped the outburst with a three-point play off a cutting layup. Durant reached the 35-point mark midway through the quarter on a 3-point shot.

Lee scored 10 points in the third quarter as Detroit carried a 91-86 lead into the fourth.

The momentum shifted dramatically in the final quarter. Brooklyn went on a 19-1 run to take a 13-point lead at 105-92. Durant had nine points, two assists and a block and Thomas scored six points during that stretch.

Detroit finally scored its first field goal of the quarter with 5:23 left as Jackson drained a 3-pointer. The Pistons missed six shots and made nine turnovers during the drought.

Brooklyn led by double digits the rest of the game.