Entire Cebu under Storm Signal No. 1 as #OdettePH intensifies to typhoon 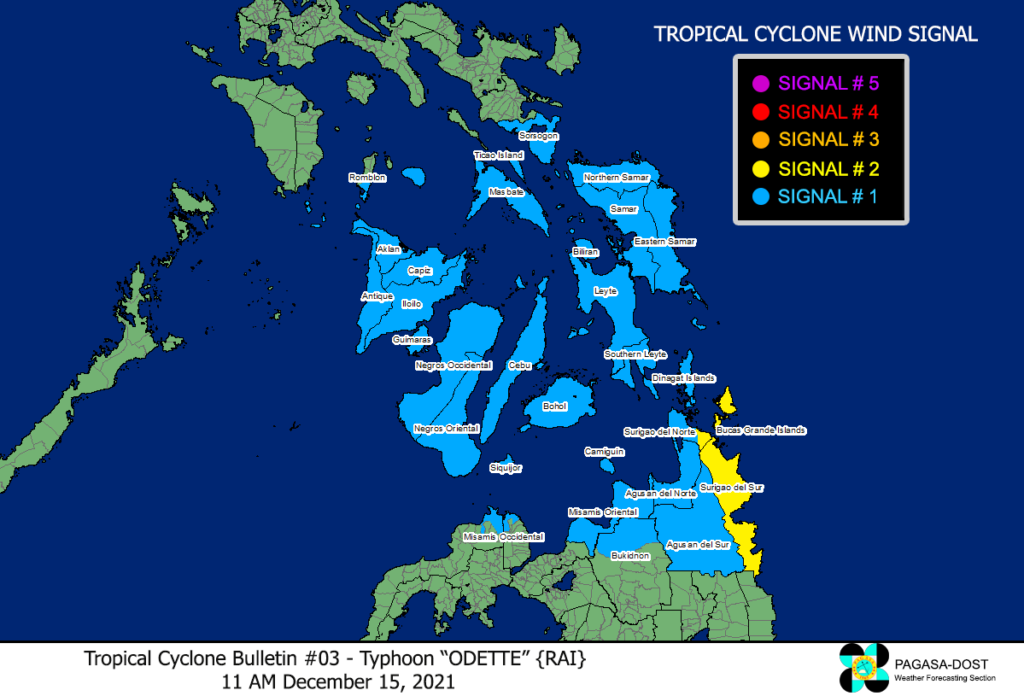 CEBU CITY, Philippines – The state weather bureau on Wednesday noon, December 15, has placed the entire island of Cebu under Tropical Cyclone Warning Signal (TCWS) No. 1 as Odette intensifies into a Typhoon.

The Philippine Atmospheric Geophysical and Astronomical Services Administration (Pagasa), in its severe weather bulletin issued at 11 a.m. on Wednesday, placed a total of 52 areas under Storm Signals.

Under TCWS No. 1, strong winds with speeds reaching up to 60 kilometers per hour (kph) are expected to prevail within 36 hours.

Pagasa has also issued a Storm Surge alert in the entire Visayas area, predicting sea waves reaching up to two meters in height.

Odette became a typhoon roughly 16 hours after it entered the Philippine Area of Responsibility (PAR).

It now packs winds with speed up to 120 kph, and gustiness reaching up to 150 kph. The typhoon is moving at a westward direction with a speed of 20 kph.

It is projected to make its first landfall within the areas of Caraga and Eastern Visayas region between Thursday afternoon and evening, December 16.

Below is the complete list of areas under active TCWS as of 11 a.m.