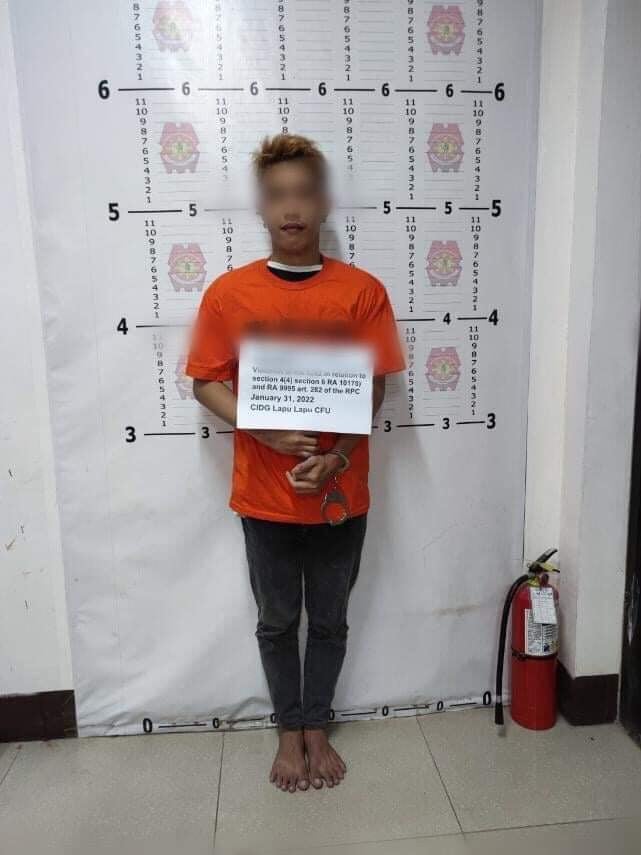 A 19-year-old man was arrested through an entrapment operation on January 31, 2022 for allegedly threatening to share nude photos of a 21-year-old woman on social media if the victim refused to have sex with him. | Photo courtesy of CIDG-7

CEBU CITY, Philippines — The Criminal Investigation and Detection Group in Central Visayas (CIDG-7) is reminding women not to share or post nude photos online so these can’t be used against them in the future.

This was what Police Colonel Ireneo Dalogdog, chief of the CIDG-7, said following the arrest of a 19-year-old man on Monday, January 31, 2022, for allegedly threatening to share nude photos of a 21-year-old woman is she refused to have sex with him.

The suspect, who was arrested in Lapu-Lapu City, was identified by police as Paul Vincent Valiente, 19, a resident of Consolacion town, northern Cebu.

(Be careful because in social media, there are a lot of scammers. You don’t know them. Let’s be careful and not easily trust anyone who you just met on social media.)

Dalogdog clarified, based on the information relayed to him, that the two were not in a relationship.

The victim met the suspect only through the social media site, Facebook. The victim only sent her photos in exchange for money to help her sustain her needs.

(While they were having a conversation, the suspect asked nude photos of the victim and promised to pay for the photos.)

However, when the victim sent the nude photos through Facebook, the suspect blackmailed her. He allegedly called her and said he would want to have sex with her. If she did not agree, he would share the nude photos online and to relatives.

As per CIDG-7’s record, Dalogdog said that hours prior to his arrest, the victim still received the same threat.

(Because she is a student and she needed money, so maybe she didn’t think about it well. But this style is very dangerous.)

The victim went to the CIDG Lapu-Lapu City to seek help with her situation.

Dalogdog said they are trying to find out if the suspect had other victims prior to this case.

Valiente, who is currently detained at the CIDG-7 Lapu-Lapu City, will be facing violations for Republic Act 9262 or the Violence Against Women and Children in relation to Section 4 and Section 6 of Republic Act 10175 and Republic Act 9995 or the Anti Photo and Video Voyeurism Act.

Read Next
Bar examinees to undergo antigen testing on Feb. 2