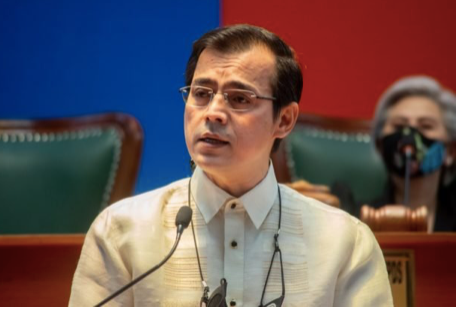 MANDAUE CITY, Cebu – Aksyon Demokratiko standard bearer Isko Moreno Domagoso on Monday, February 28, 2022, vowed to run after the estimated P200 billion in estate tax debts incurred by the Marcos family and utilize this in aiding the millions of Filipinos who were gravely affected by the COVID-19 pandemic.

“Meron akong gagawing ayuda. I’ll make sure that I will implement the decision of the Supreme Court, GR 120880, na may isang pamilya na pinagbabayad ng estate tax. As we speak, it’s about P200 billion already,” he told reporters and members of organized labor and transport workers’ groups at the headquarters of the Isko Moreno Domagoso for President in Intramuros, Manila.

Although he did not mention any names, Moreno was referring to a June 1997 SC ruling ordering the Marcoses to pay the P23.29 billion in estate tax computed by the Bureau of Internal Revenue from 1982 to 1986.

The Marcoses have contested the BIR’s deficiency assessment, causing the amount to reach P203.8 billion, including penalties that have accumulated in the decades that the Marcos heirs failed to pay the debt.

Moreno said he actually planned to mention his promise to run after the P200-billion debt on Sunday, during CNN Philippines’ Presidential Debate, but failed to do so due to the lack of opportunity.

It could be noted that the son and namesake of the late dictator, former senator Ferdinand Marcos Jr., was himself convicted of tax evasion.

Marcos Jr. was convicted in 1995 because of his failure to file mandatory income tax returns and pay income tax from 1982 to 1985. His tax evasion conviction and his family’s huge debt were cited in the petitions to cancel his certificate of candidacy for president.

On Nov. 9, 2018, the Sandiganbayan’s anti-graft court also convicted Imelda Marcos, widow Ferdinand Marcos Sr., of seven counts of graft for creating private foundations in Switzerland when she was a government official that allowed her family to funnel illegally amassed government funds during the martial law period.

The former first lady — and, at the time, a district representative of Ilocos Norte — was sentenced to imprisonment of six years and one month to 11 years for each count of graft, which is equivalent to a minimum of 42 years in prison. The case is now on appeal and the Marcos matriarch has not spent a night in jail.

Meanwhile, Moreno vowed to implement the law fairly and equally to whoever is found guilty.

“There is a decision they should pay, those people should pay, whoever they are. Kung siya ay collectibles na, dapat kolektahin,” he said in an interview that followed.

Promoting equality is one of the priorities spelled out under Moreno’s 10-point Bilis Kilos Economic Agenda which will be his blueprint to accelerate human and economic growth once elected president.

In the meantime, the Aksyon Demokratiko presidential candidate urged the people to choose wisely in the upcoming elections lest they vote the wrong candidate into office.

Bornea to fight dangerous Mexican on August 20 in Mexico