Cebu City police on Carbon market incident: We’re only there to keep peace and order 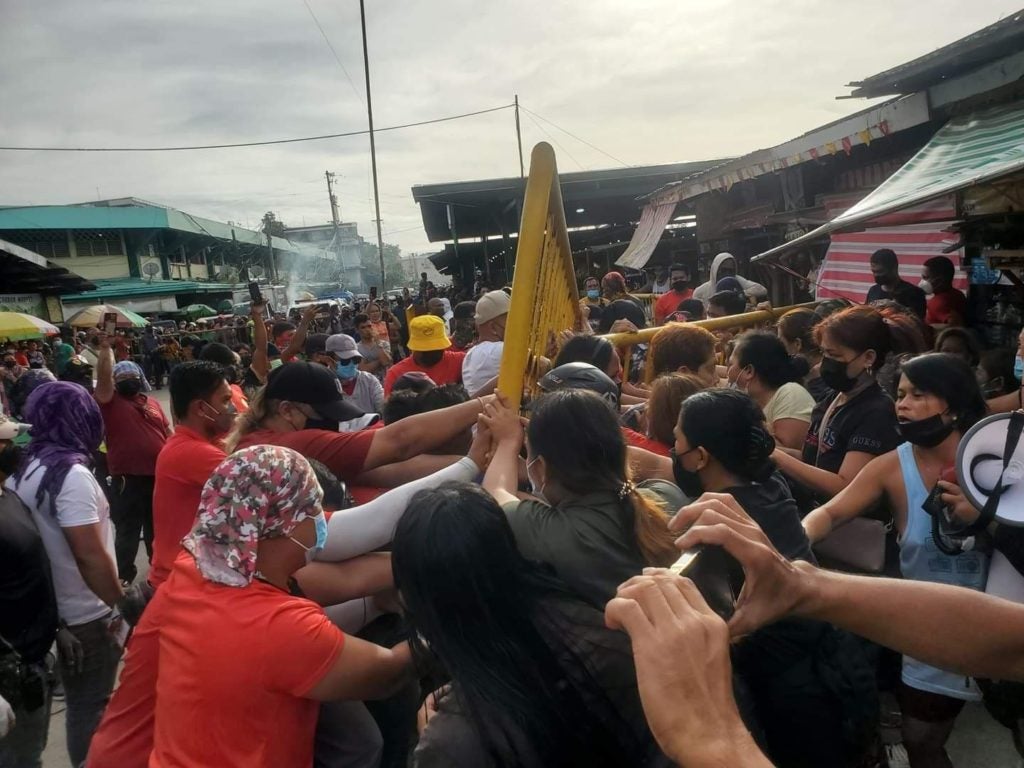 Vendors of Unit II Carbon market and their families prevent the PROBE Team of Cebu City from putting railings in front of their stall, which can stop the former’s livelihood if the railings are placed there. | Contributed photo

CEBU CITY, PHILIPPINES — Cebu City policemen assure vendors that they were not there at the Unit II of Carbon market to stop their livelihood but they were there only to keep the peace and order in the area.

Police Lieutenant Colonel Maria Theresa Macatangay, Information Officer of the Cebu City Police Office (CCPO), gave this assurance after the vendors of the Unit II on Monday, March 21, again prevented the team from the Prevention, Restoration, Order, Beautification, and Enhancement (PROBE) from putting railings, which block the vendors from the road in the area.

(The presence of the police was only to ensure and maintain peace and order while the representatives of the city government placed railing and nothing more … This is not to stop them of their livelihood, but just to enforce what is right to enforce for the highways and roadsides.)Cebu

Macatangay further said that they were doing because they needed to clear highways and roadsides because there is a law about it.

“Kailangan man gyud iclear ang hiways and roadsides because there is a law mandating for that. It was even mandated by the DILG (Department of Interior and Local Government) na iimplement gyud ang road clearing,” Macatangay said.

(We need to clear the highways and roadsides because there is a law mandating it. It was even mandated by the DILG (Department of Interior and Local Government) that the road clearing should be implemented.)

Macatangay gave this statement after tensions again rose in the Unit II of Carbon market on Monday morning (March 21) as the PROBE team again tried to place railings near vendors stalls.

Arlyn Subing-subing, president of Quezon Boulevard Bagsakan, was dismayed and confused on why they were putting the railings there.

“Wala ko kasabot..kuyaw kaayo kay gi no entry nila tanan (I did not understand…it was dangerous because all the exits were now no entry.),” said Subing-subing.

Subing-subing further claimed that the railing installation was not adequately addressed to them.

She claimed that they only mentioned “Operation,” when they started putting the railings, which caused tension to rise among the vendors and the people trying to put the railing in the area.

Meanwhile, the CCPO is asking for the vendors’ cooperation and understanding in respect to the exercise, which is being carried out entirely on the basis of a mandate.

Macatangay also said that they (police) should also remain impartial to the situation as long as there would be no one being severely harmed or properties being destroyed in the area.

She also said that they were also awaiting instructions from the Cebu City government since it seemed that there were a few damage properties during the incident there.

Read Next
EOC: Only 16 out of 27 brgys in Mandaue have COVID cases