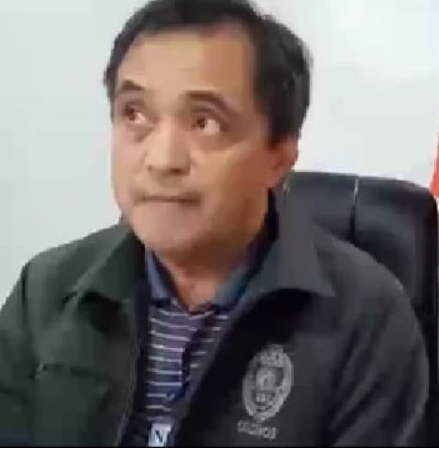 Agent-in-charge Arnel Pura of the National Bureau of Investigation Cebu District Office is calling on those persons who bought land from a man, who had fake documents of ownership of a 45-hectare Paknaan lot in Mandaue City, to visit the office and file charges against the man. | CDN Digital file photo

MANDAUE CITY, Philippines — The Mandaue City government has repossessed almost 45 hectares of timberland in Barangay Paknaan from an individual who illegally claimed the property as his own.

This was after the National Bureau of Investigation Cebu District Office arrested the suspect identified as Raul Villacarlos Canoy.

Agent-in-Charge Arnel Pura said they summoned Canoy to appear in their office on Wednesday, April 6, following the complaint from the city government regarding the city’s property pursuant to Republic Act 5519 or the Charter of Mandaue City.

Canoy was arrested after he presented several documents including the tax declaration, which turned out to be fake.

All documents recovered will be submitted for inspection to the Bureau of Internal Revenue, Register of Deeds and the City Assessor’s Office to further check the document’s authenticity.

Lawyer Jamaal James Calipayan, Mandaue City administrator, said the issue started in 2017, when the reclamation in the mangrove area began.

Calipayan said many mangroves died because of the illegal reclamation.

He said that was why when Mayor Jonas Cortes sat as mayor, Cortes made it a priority to repossess the property.

He said they asked the NBI to help them with the investigation.

The city administrator said that they got certifications from the Philippine Reclamation Authority, and different government agencies such as the Department of Environment and Natural Resources (DENR) certifying that the reclamation did not have a permit.

Calipayan said the suspect had also sold some of the pieces of land which was bought by a few individuals including teachers and police.

Pura is calling on those who bought spaces in the area to show up at their NBI office at the back of the Mandaue City Sports Complex to file further charges against Canoy.

Canoy for his part, refused to give a statement.

Currently, the suspect is facing charges of falsification of documents.

Calipayan is advising individuals to be careful and do their due diligence when buying a property, especially those on foreshore land.

Calipayan said the city was very happy to retake the property.

“Si Mayor would just like to send a message to everyone nga naay plan especially ning illegal claimants. We will really pursue kaning illegal nga mangangkon, to the full extent of the law and in coordination with our law enforcement [agencies]. The city will work towards asserting the right of the city of Mandaue sa atoang kaugalingung properties,” said Calipayan.

(The mayor would like to send a message to those who plan [to illegally claim government land] especially those illegal claimants. We will really pursue their illegal claim to the full extent of the law and in coordination with our law enforcement [agencies]. The city will work towards asserting the right of the city of Mandaue to our own properties.)

Lawyer John Eddu Ibañez, Mayor Cortes’ chief of staff,  also said that the mayor and the city government would not allow an inch of the property of Mandaue city to be taken by these unscrupulous individuals.