Consolacion accident: Truck falls on its side, slams into two houses, injures 3

Slippery road, engine problem possible cause of the accident — police 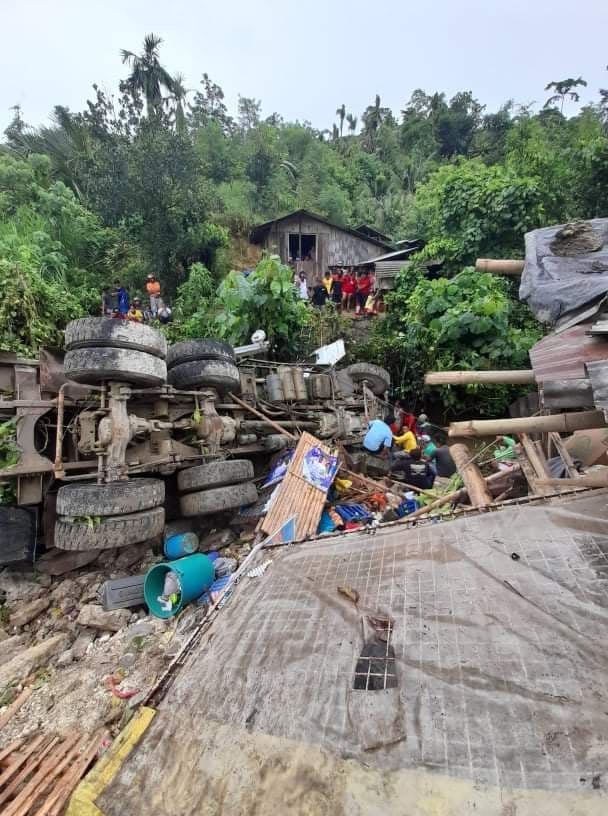 A 10-wheeler-truck figured in an accident after it fell on its side while in the vicinity of Barangay Pulog in Consolacion town northern Cebu at past 9 a.m. on Saturday, April 9, 2022. | contributed photo via Paul Lauro

CEBU CITY, Philippines — A slippery road and a possible mechanical problem of the engine possibly caused the driver of the 10-wheeler truck to lose control of the vehicle, which then fell on its side and slammed into two houses, injuring the driver and two others in Barangay Pulog, Consolacion town in northern Cebu today, April 9.

Police Staff Sergeant Roel Aquino, Consolacion police investigator, said the driver, Franklyn Salonga, 34, of Barangay Pulog, Consolacion town, was still recuperating at the hospital after he was rescued from being pinned by steering wheel of the truck for at least 4 hours.

Aquino said no charges would also be filed against Salonga after the two other persons injured in the accident agreed to settle amicably with the driver and the representatives of the company, where Salonga worked.

Brothers Johan and Joseph Gasal, who were inside one of the houses where the truck slammed into, were slightly injured in the Consolacion accident.

Police Staff Sergeant Aquino said that the representatives of the company and the driver agreed to shoulder the expenses for the repair of the houses and the medical expenses of those injured.

Aquino also said that the accident was possibly caused by a malfunction of the engine, making the driver to lose control of the truck, which was carrying a full load of sand.

He also said that the slippery road caused by the rain and the downhill curved portion of the road contributed to the accident.

Investigation showed that Salonga was coming down from the mountain, carrying a full load of sand, at past 9 a.m. today, April 9, and he lost control of the vehicle, which fell on its side and slamming into two houses.

Aquino said Salonga was pinned by the steering wheel inside the truck and was rescued and brought to the hospital at nearly 2 p.m. today.

He also said that the truck boy accompanying Salonga was not hurt in the accident.

With this accident, Aquino reminds drivers to be extra careful in driving, especially that roads are slippery due to the rains.

(Let us be careful in driving. Drive carefully and don’t overspeed and it would be better to just stay home today because of the rains and the roads are slippery.)