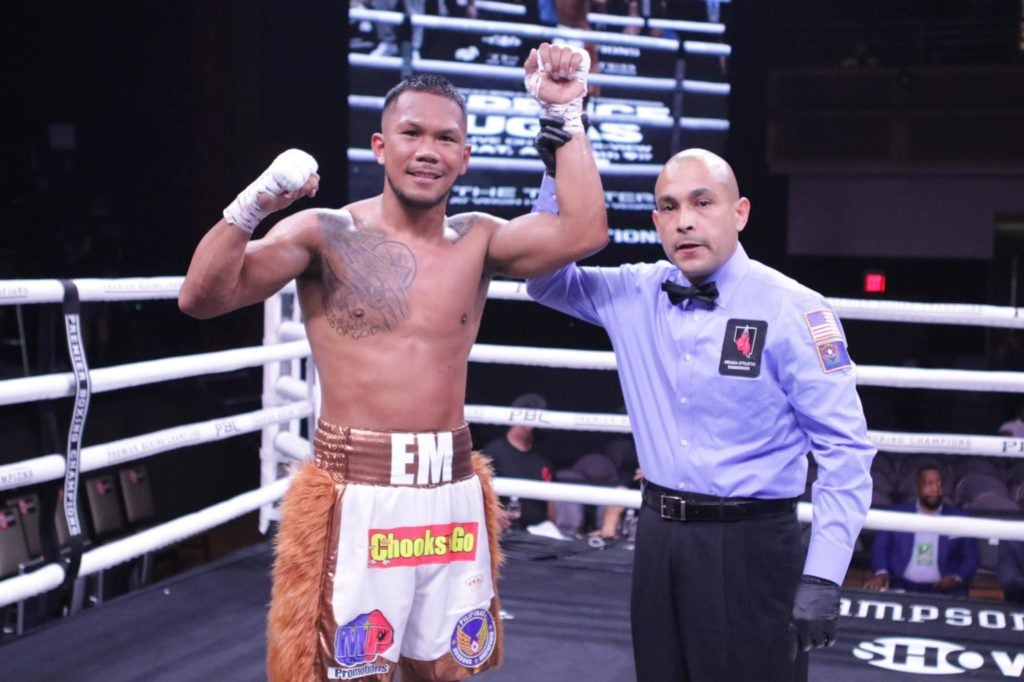 Referee Raul Caiz Jr. raises the hand of Eumir Marcial after the latter won a fourth round TKO against Isaiah Hart. | Photo from Marcial’s Facebook page.

Eumir Marcial connected a left hook that staggered Hart in the fourth round, prompting the referee to stop the fight at the 47-second mark of the round.

Before that, Marcial got knocked down three times in the fight. Marcial hit the canvas in the opening round after getting hit with Hart’s right straight.

Marcial continued to push forward pummeling Hart with his combinations, but in the second round, he got knocked down again, getting tagged with the same punch. Marcial, again, fell on his back on the canvas after getting hit with Hart’s right straight.

In round three, Marcial kept pushing forward in desperation to score a knockdown. He managed to hit Hart with numerous combinations to the head and body, but the American was still standing on his foot throughout the round.

In round four, Marcial continued to pummel Hart with combinations, until a left hook staggered Hart. The American was groggy and was forced to lean against the ropes with Marcial about to throw more punches when the referee Raul Caiz Jr. stepped in and stopped the bout.

Hart was disgruntled about the stoppage as he was still defending himself despite being groggy from getting hit with Marcial’s left hook.

His pro debut fight in 2020 against Andrew Whitfield ended in a unanimous decision victory while last year, Marcial of Zamboanga who is fighting under MP Promotions’ banner clinched the bronze medal in the Tokyo Olympics after reaching the semifinals of the men’s middleweight boxing event.

Read Next
Duterte dances with daughter Kitty on her 18th birthday