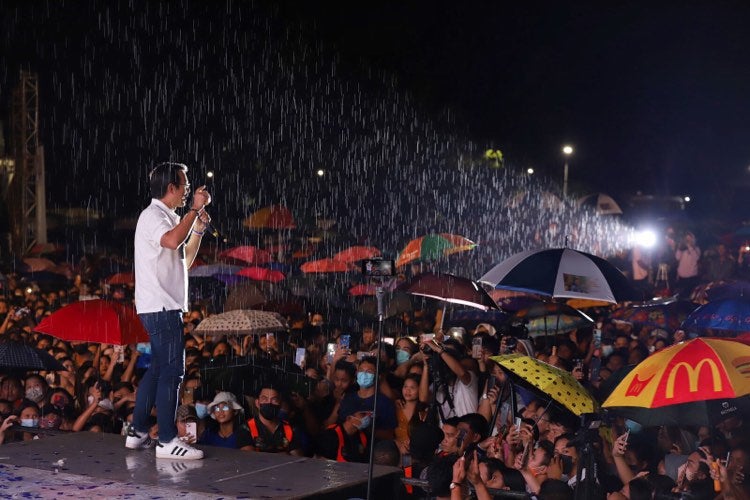 Unmindful of the rain, thousands of supporters joined presidential candidate Isko Moreno during the “Iskoncert” in Toledo City. | Contributed photo

MANDAUE CITY, Cebu – Back-to-back concert-rallies in support of Aksyon Demokratiko presidential candidate Isko Moreno were held in the cities of Lapu-Lapu and Toledo that saw 55,000 Cebuanos going all-out for the Manila city mayor who barnstormed Cebu province for two days.

Despite the stormy weather, 35,000 Cebuanos on Friday, April 8, packed the outdoor area of the Hoops Dome in Lapu-Lapu City to see and hear their chosen candidate. When Moreno  asked the crowd “Nagpunta ba kayo dito ng kusa?” he was greeted with a thunderous “Oo!” 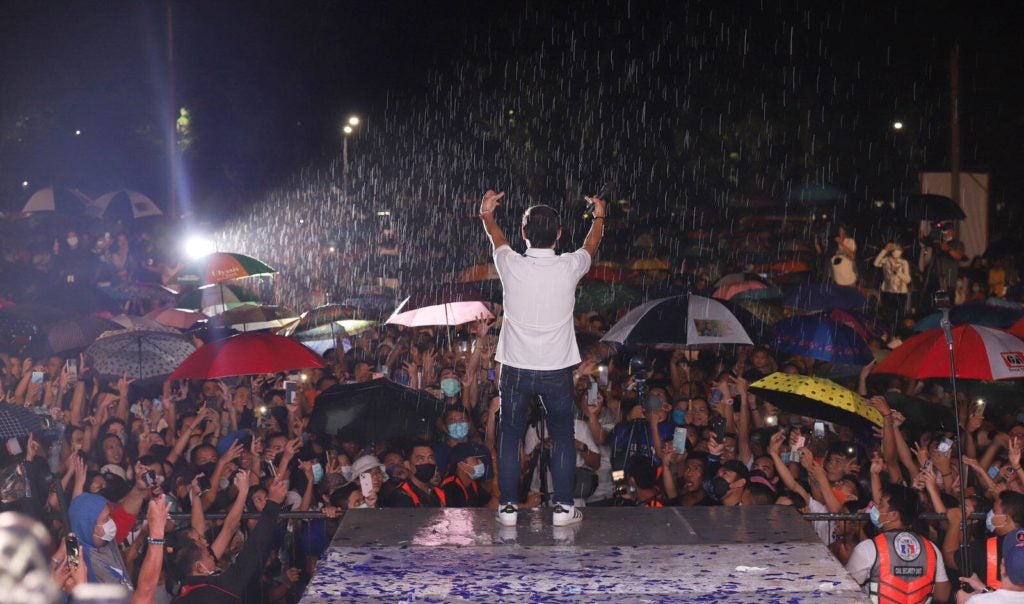 The crowd at the “Iskoncert in Toledo City. | Contributed photo

In Toledo City, the force of nature could not contain the outpouring of support for the 47-year-old presidential candidate as 20,000 Cebuanos braved the rains spawned by Tropical Depression Agaton to show their full love and support for Moreno in a concert-rally on Saturday, April 9.

The scene was reminiscent of Moreno’s grand rally in Northern Mindanao last March 28 when thousands of Cagayan de Oro City residents ignored a heavy downpour and the personal entreaties from the charismatic and well-loved Manila Mayor to cut the program short just to show their overwhelming support for their young presidential candidate. 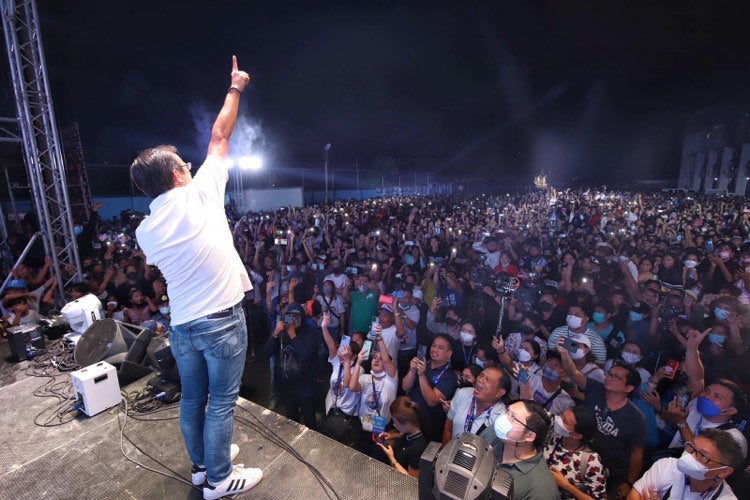 Both Cebu concert-rallies were organized by the group of Cebu 3rd District Congressman and Deputy Speaker Pablo John “PJ” Garcia, who has directly endorsed Moreno as his presidential candidate.

The 55,000 combined crowd in Cebu was followed by mammoth crowd of 80,000 which attended the “Isigaw Mo, Isko!” concert-rally in Manila Sunday.

As early as 2pm, some 25,000 people were already assembled along the stretch of T.M. Kalaw Street particularly at the corner of Maria Orosa where the huge stage was located for the concert of several artists and bands who volunteered their services for free.

The “Isigaw Mo, Isko!” concert-rally was led by singer-musician Jimmy Bondoc, who was the main organizer of the event that saw big-name entertainers such as Luke Mejares, Aia De Leon of Imago, Shamrock, South Border, Soapdish, This Band, Nina and Quest.

Between 6 p.m. to 7 p.m., the crowd ballooned to 65,000 and peaked at 80,000 when Moreno was already on the stage talking directly to the people in his usual question-and-answer format similar to what he did in past town hall meetings in the provinces. 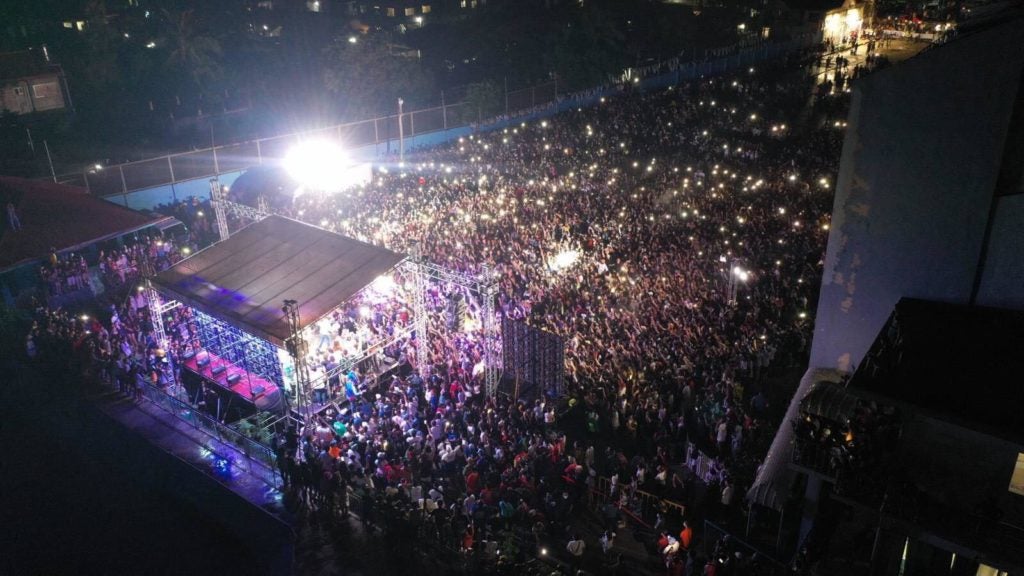 In an ambush interview on the sideline of the concert-rally, Moreno admitted that he has been overwhelmed by the kind of support given him by people from all walks of life during his campaign rallies that further strengthened his resolve in his presidential campaign.

But then again, we continue to reach as many kilometers as much as possible katulad ng nangyari sa Cebu kahapon at nung isang araw, wow parang kahit saan kami magpunta nao-overwhelm kami because if you look at the numbers the way you’re asking me about those data being presented sa general public parang hindi nagre-reflect sa tunay na sitwasyon sa baba sa kalsada. And as you all know, what we’re seeing a group of thousand, a group of hundreds or tens of thousands of people are unique individuals in a different geography,” Moreno told reporters.

The 47-year-old presidential candidate stated in recent interviews that the tens of thousands of people that he directly met and shook hands with in various provincial sorties do not jibe with pre-election survey results made by major polling firms that tend to show his numbers at a far third from the frontrunner.

“Today Sunday what you saw here is about 80% of that is from Metro Manila, Central Luzon and Southern Luzon volunteers and supporters. Ang maganda rito sila ang gastos so parang it’s a family day after 2 years of lockdown, of uncertainty. So parang unwind so this is a refresher in their hearts and minds and as you heard tinanong ko naman sila, pwede na tayong magpahinga, sabi nila tuloy ang laban. so nakakatuwa so that is gonna happen in the next 29 days we will continue what we’re doing to go directly to the people,” Moreno explained.

Moreno said the mammoth crowd in Manila is similar to what he experienced during recent campaign sorties in the Zamboanga Peninsula (Zamboanga del Sur, Zamboanga del Norte, and Zamboanga Sibugay) and Cebu province. He said is also looking forward to visiting more provinces and cities in the coming days and weeks as they continue to go around Mindanao, Visayas and Luzon.

Read Next
Cops after group of wives selling illegal drugs