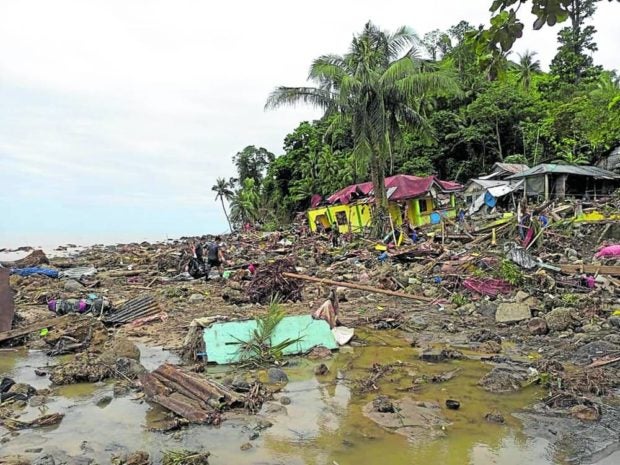 SEARCH CONTINUES Search and retrieval teams, which include soldiers from the 802nd Infantry Brigade, scour Barangay Pilar in Abuyog, Leyte, even during the Holy Week to locate people buried by the landslide that hit the village and other parts of Leyte at the height of Tropical Storm “Agaton” (international name: Megi) on April 10. —PHOTO COURTESY OF THE ARMY’S 802nd INFANTRY BATTALION

TACLOBAN CITY, Leyte, Philippines — The mayor of Abuyog town in Leyte province is planning to declare Barangay Pilar a “no man’s land” after 80 percent of the village was covered with rocks and soil during a landslide that occurred amid heavy rainfall spawned by Tropical Storm Agaton (international name: Megi) on April 10.

Mayor Lemuel Gin Traya said he would ask geologists from the Mines and Geosciences Bureau of the Department of Environment and Natural Resources to inspect in Barangay Pilar to determine if it was still suitable for occupancy.

Survivors in the area, he said, need to be relocated to avoid another disaster.

Of the 52 people who died in Abuyog in the landslides, 48 were in Barangay Pilar, where at least 55 others were still missing.

One of the fatalities was the village chair, Adelaida Rosquites, whose body was found on Maundy Thursday.

The rest of the fatalities were in Barangay Tib-o, with two dead; and one each in Barangays Bahay and Combis.

Traya admitted that Barangay Pilar has been declared a danger zone due to possible landslides as early as 2018.

“We were advised that it was a hazardous area but the people there found it difficult to relocate because of their livelihood,” Traya said.According to the mayor, most of the residents in Pilar, a coastal village located at the foot of a mountain, rely on fishing as their source of livelihood.

“Due to the massive landslide incident, we will request geologists to conduct an inspection to see if the area is still safe for residents,” Traya said.

The town mayor said the city government would construct bunkhouses as temporary shelters for those affected by the landslide in Pilar since evacuation centers could only be used for at least for three months.

The temporary shelters of these families would be located at the 3-hectare lot owned by the family of the mayor in Barangay Tinale.

Landslides at the height of Agaton’s wrath also killed 109 people in Baybay City, also in Leyte.

At least 75 individuals in Baybay were still missing, including 67 from Kantagnos, seven from Mailhi; and one from Pangsugan.

36 die in Leyte landslides due to ‘Agaton’

Visayas Command steps up search and rescue efforts in Leyte