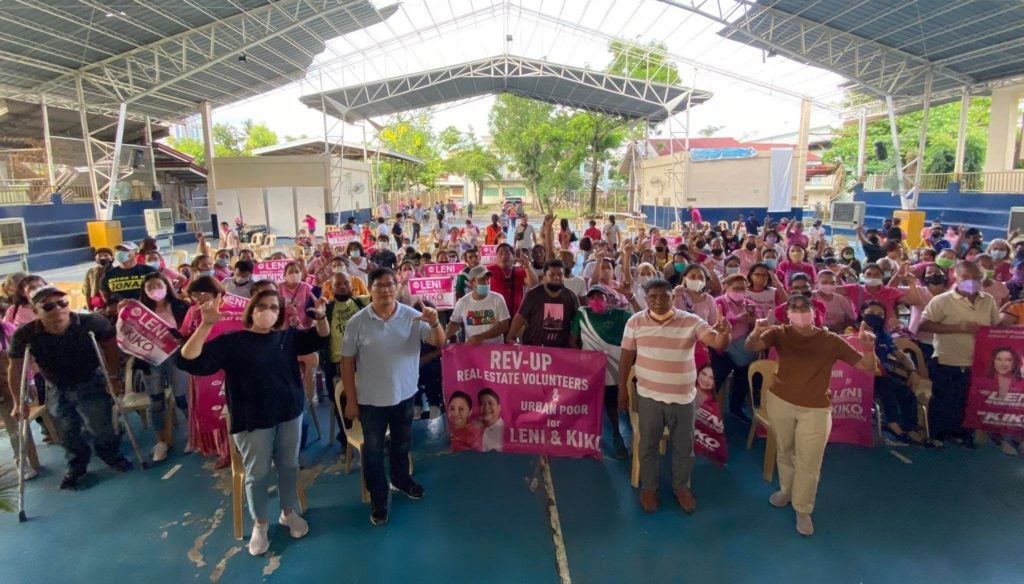 Members of the PWD sector have joined the latest round of discussions by REV UP for Leni-Kiko. | Contributed photo

MANDAUE CITY, Cebu – Members of the PWD sector have joined the Real Estate Volunteers and Urban Poor (REV UP) to show their support for the Leni-Kiko tandem.

About a hundred PWD sector members committed to support the tandem in the national elections after a two-day assembly that was held at the  Colegio de la Inmaculada Concepcion (CIC)-Mandaue Campus recently.

On the same occasion, over 500 urban poor leaders coming from across Cebu province also reiterated their support for Vice President Leni Robredo and Senator Kiko Pangilinan with the firm belief “that their brand of leadership and ideals are best suited in easing out the needs of the poor and marginalized sector,” read the group’s statement. REV UP convenors with members of the PWD and urban poor sectors. | Contributed photo

Chua expressed confidence that with their continued growth, they are also able to reach more members of the marginalized sector.

With this, they hope to especially convince those who remain undecided to vote for the Leni-Kiko tandem in Monday’s elections.

“Prior to this, there were other urban poor groups that have already switched to Leni- Kiko. We hope that with the added support of the PWD sector that will surely trickle down to the rest of the poor and underprivileged in the society, those undecided voters will make a last minute shift and join the ‘mass exodus’ towards a Leni-Kiko win,” Chua said.

Emily Cabillada of REV UP said Robredo is the most qualified leader, who can work for the best interest and welfare of the PWDs “because such sector is very close to her heart.”

“Robredo vows inclusivity, healthcare for persons with disability,” Cabillada shared.  “Most importantly, the PWD sector is very close to VP Leni’s heart. Three of her family [members] are genetically blind – her father-in-law, sister-in-law and brother-in-law. That is why she truly understands the hardships the PWD goes through in our society where the landscape and policies are so unfriendly to them.”

Marilous Canizares of REV UP said they also support Robredo’s plan to transfer supervision of the National Council on Disability Affairs from the Department of Social Welfare and Development (DSWD) to the Office of the President in order to create a comprehensive database on PWDs which she could use for policy implementation, and in increasing thecivic participation of PWDs in local governance.