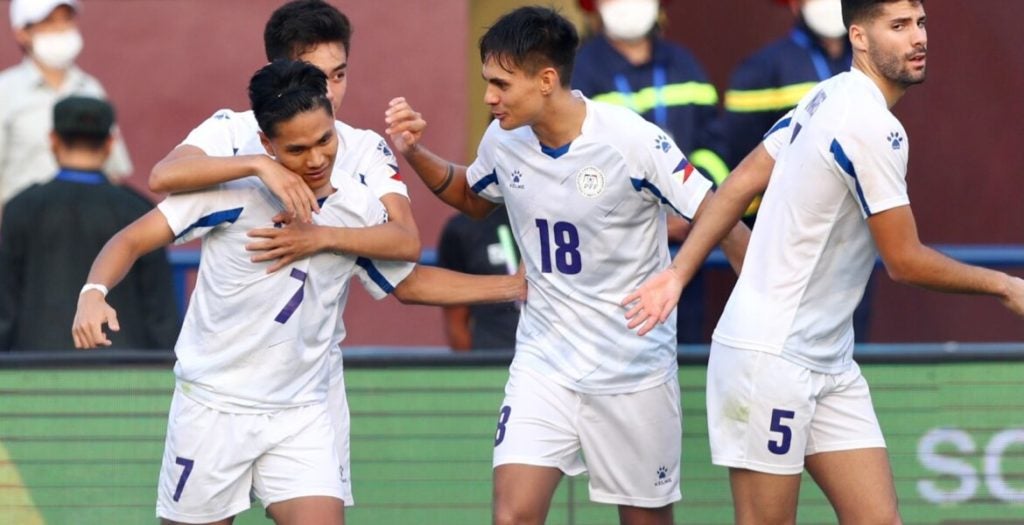 The Philippine Azkals U-23 squad celebrates during their match against Timor-Leste in the 31st SEA Games in Vietnam. | Photo from PFF Website.

CEBU CITY, Philippines— The Philippine Azkals’ U23 squad opened their campaign in the men’s football of the 31st Southeast Asian Games (SEAG) with a dominating win against Timor Leste, 4-0, on Friday, May 6, at the Viet Tri Stadium in Phu Tho, Vietnam.

Rontini tallied the Azkals’ first goal through a header from captain, Stephan Schrock’s cross pass in the 11th minute.

However, the Azkals wasn’t able to score the rest of their goals until the second half. Chung slotted the Azkals’ second goal at the 56th minute courtesy of Schrock’s pass.

Bedic handed the Azkals’ third goal at the 7th minute from a one-on-one match against Timor Leste’s defender. Kekkonen nailed the fourth goal for the Azkals at the 81st minute from Oliver Bias’s timely pass.

“It’s always going to be difficult going into the tournament because we don’t know exactly where we are as a team, but everyone showed a lot of commitment and discipline,” Schrock said. “The boys did very well.”

The Azkals have a one-day break before taking on the Vietnamese on Sunday in a match that could determine their chances of advancing to the semifinals.

“We sleep, eat and we go again,” said Schrock, expressing confidence of a strong showing against the hosts.

Except for an early chance, Timor Leste hardly had a sight on goal as the Philippines dominated proceedings at midfield.

Also on Friday, the Philippines handball squad won their opening match against Thailand, 18-16, 18-16.