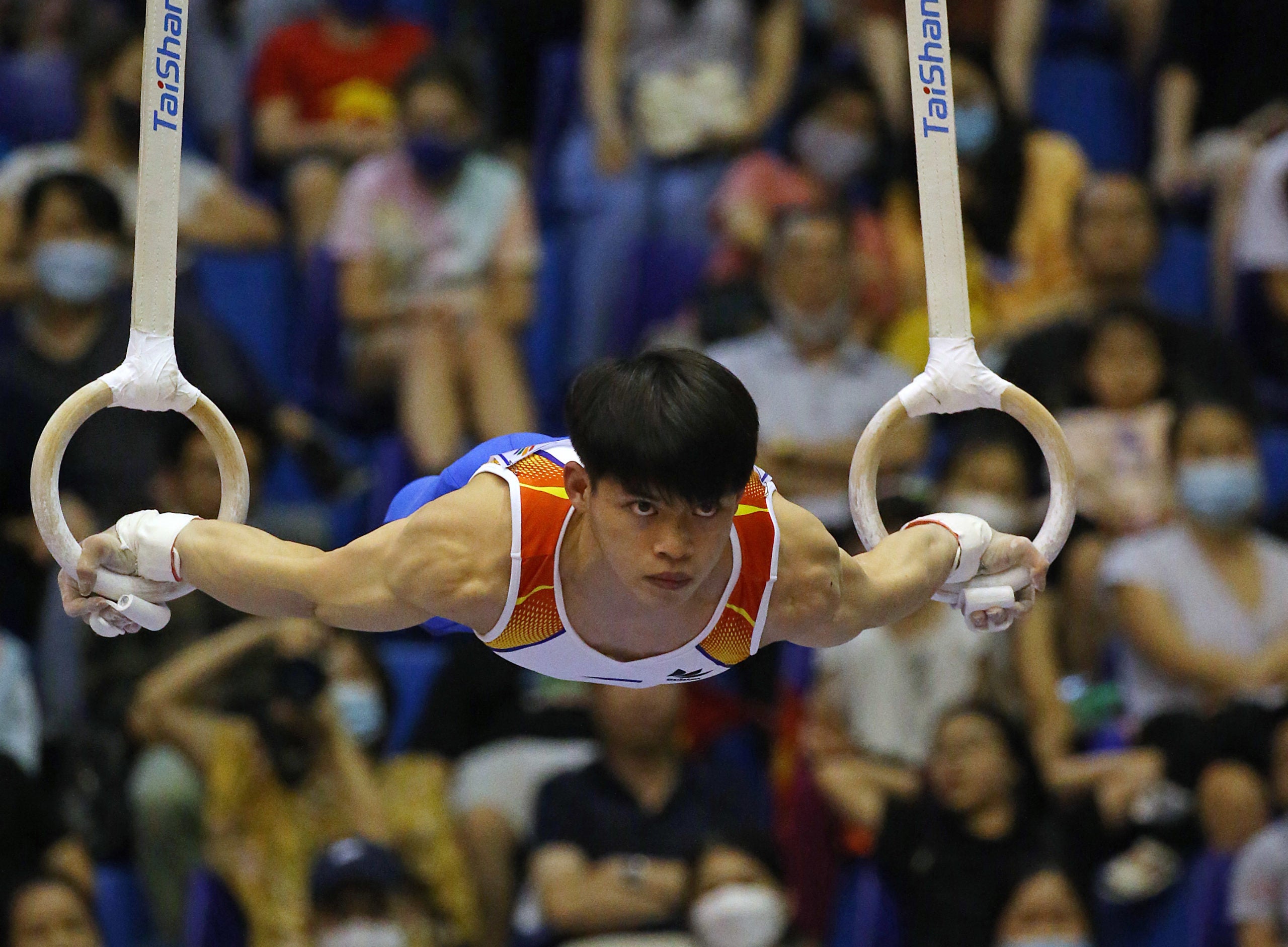 Carlos Edriel Yulo slumped behind one of the monitor screens strewn around the Quan Ngua Sports Palace, hiding himself from public view as he awaited his turn to hit the rings.

But when his time came to perform, the pocket-sized wonder gave everyone present a sight to see.

Flashing a perfectly steady maltese—a difficult pose that gives the impression of one flying—Yulo captured the crowd’s adulation and went on to claim his third gold medal on Sunday to continue fueling the Philippines’ campaign in Hanoi in the 31st Southeast Asian (SEA) Games.

“I’m very happy. I really wanted to win that gold,” said Yulo in Filipino after upstaging two Vietnamese bets. “I wasn’t expecting to win, but I just focused on my routine. I’m happy I got it.”

He had also ruled the floor exercise in the afternoon for his second gold, which came after Friday’s all-round crown. He will vie for three more golds (high bar, parallel bar and vault) in the last day of artistic discipline on Monday.

Another gymnast shared the spotlight as Fil-American Aleah Finnegan grabbed the women’s vault gold for her second mint of the competition.

“I don’t think I could ask for anything better, I’m just very honored to be here,” said the Missouri-based gymnast, who was part of the United States national team that competed in the 2019 Pan American Games.

A far third, though 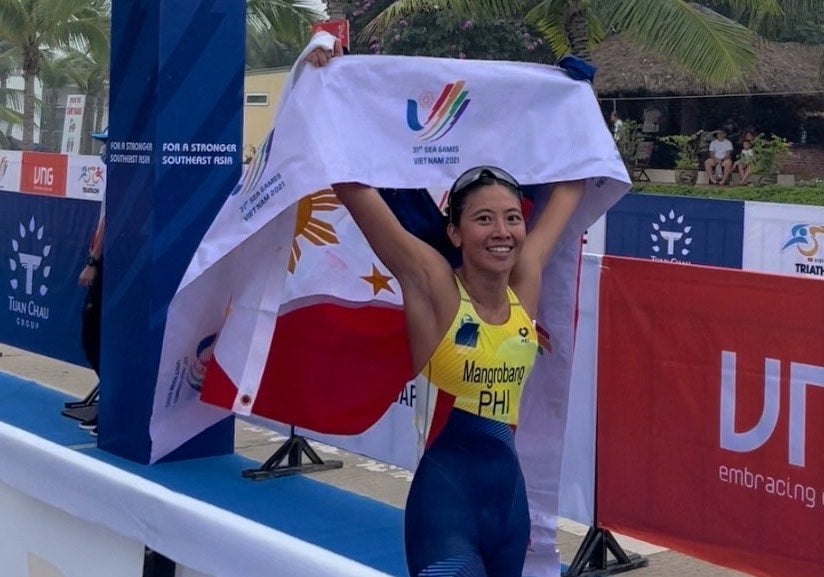 Their triumphs hiked the country’s gold collection in the sport to five with still one full day left in artistic discipline.

Kim Mangrobang cooled her heels for less than 24 hours and then raced in the duathlon to pocket a second gold medal at Tuan Chau Peninsula.

After successfully defending her triathlon title on Saturday, the 30-year-old Mangrobang dominated in the run-bike-run event, clocking two hours, 13 minutes and 12 seconds that left the field biting her dust.

Men’s triathlon champion John Chicano wasn’t as lucky, though, as he finished fourth.

Still, it was a productive haul for the sport for the Philippines as it won three of the four gold medals, with only the men’s duathlon gold slipping away after hometown bet San Pham Tien timed 1:55:58 to win. Indonesians Rudy Febriade (1:56:12) and Javhavi Johan (1:57:36) were 2-3. 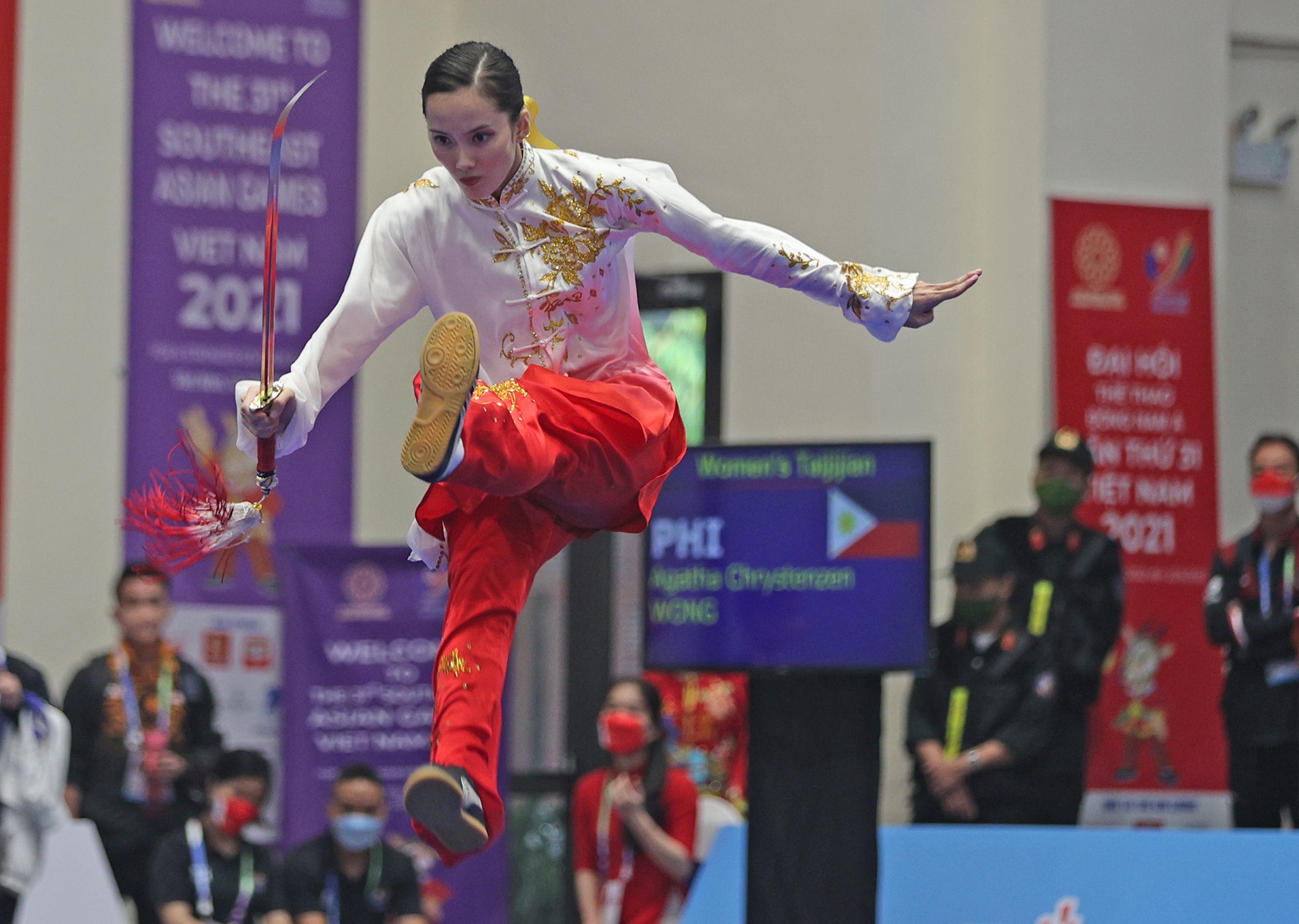 Another sporting queen for the country, Agatha Wong, came through with a golden performance. Holding a tasselled sword, Wong kicked, leapt and turned with smooth movements to reign in the wushu women’s taijijian.

“I was so scared because I felt the SEA Games was too soon for me, usually it’s held in December, now they held it in May,” said Wong, who lost the gold in her favorite taijiquan (no weapon) last Saturday. “Everyday in training I was telling myself to do my best for this moment.”

And right after the dusk, William Morrison defended his shot put gold medal in athletics at My Dinh National Stadium.

The fight for the country’s most important gold medal, men’s basketball, begins on Monday with superstar-heavy Gilas Pilipinas taking on Thailand at 4 p.m. (Manila time) at Tranh Tri Gymnasium.

Read Next
#NeverAgain bundle still on sale; book on Leni too