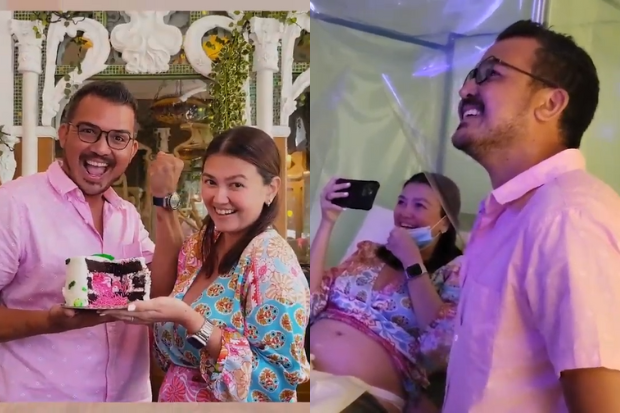 Months after telling the public that they were expecting a baby, Angelica Panganiban and her non-showbiz boyfriend Gregg Homan revealed that their first child together is going to be a girl.

The couple announced this by throwing a gender-reveal party and showing their first ultrasound experience, as seen on their YouTube vlog “The Homans” today, June 11. The actress and Homan first gave a glimpse of the ultrasound session in an earlier vlog, but did not reveal their baby’s sex at the time.

Panganiban and Homan were ecstatic and cried tears of joy after being told they were having a baby girl. They then met with friends and loved ones, including actress Glaiza de Castro, to let them know about their baby’s sex.

“This is a very special vlog for us and we are excited to share with you one of the best moments of our lives,” the actress and Homan said.

Panganiban confirmed her relationship with Homan on New Year’s Day of 2021. They then celebrated their first anniversary in July, also last year. The couple recently reminisced over their love story and reflected on what made their relationship “worth it.”

The actress announced last March that she was pregnant with her first child, then flaunted her growing baby bump at the beach last April.

Judy Ann Santos is the happiest ‘ate’ for Angelica Panganiban!