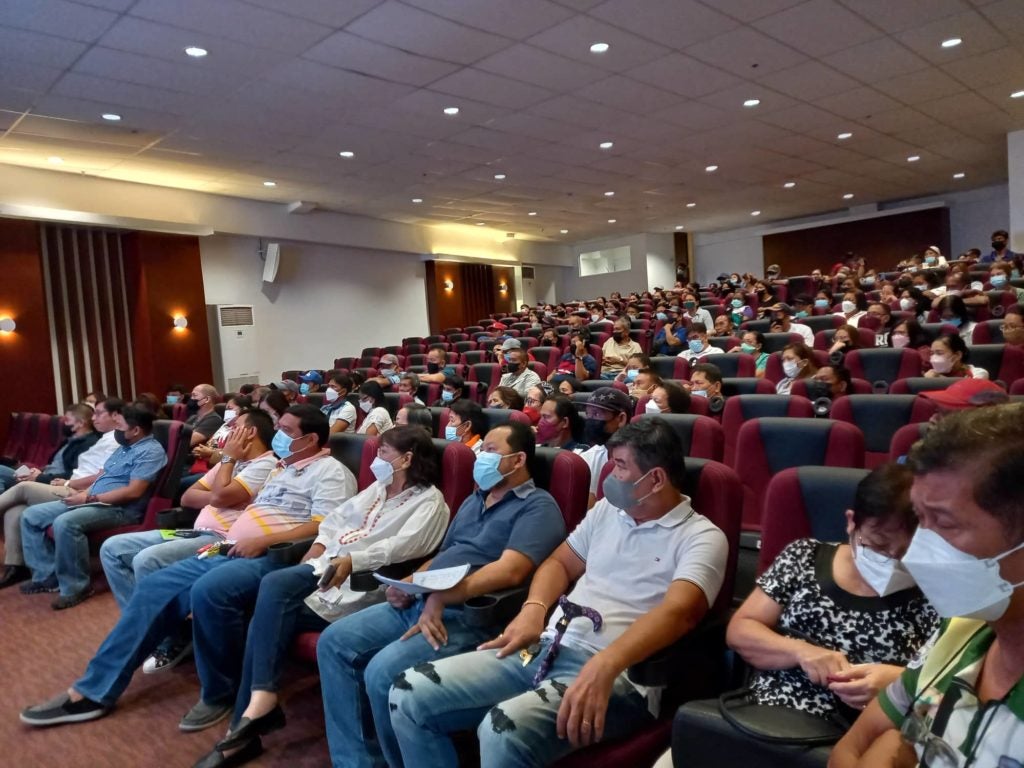 The public hearing on the proposed Consolacion reclamation project.

MANDAUE CITY, Philippines — A public hearing on the reclamation project in Barangay Tayud that was proposed by the local government of Consolacion was conducted at the amphitheater of the town’s municipal hall on Tuesday, June 14.

The hearing that was hosted by the Department of Environment and Natural Resources Environmental Management Bureau (DENR-EMB) was attended by town officials, representatives of the different barangays, shipyard associations, and other stakeholders.

During the hearing, a heated exchange between the representatives of the shipyard association and the local government transpired.

The representatives questioned the allegedly procedural lapses prior to the conduct of the public hearing.

Lawyer Therese Amor, one of the representatives, said they are representing 10 shipyards. of the 11 shipyards in Barangay Tayud in Consolacion.

Lawyer Aylward Consulta, one of the representatives, said the lapses that he cannot divulge are in the motion that they submitted for the cancellation of the scheduled hearing.

“This is a constitutional violation of due process wherein the rules of the DENR-EMB itself are not followed,” said Consulta.

Incumbent Mayor Joannes “Joyjoy” Alegado stressed that the government has followed all procedural requirements needed and required by the agencies where they applied.

Incumbent Vice Mayor and Mayor-elect Teresa “Nene” Alegado believed that the shipyards wanted to delay and distort the plans of the government. The 40-year tenurial instrument of the majority of the shipyards had already expired, they said.

The 235-hectare reclamation project is seen to boost the economy of the town and the entire province if implemented.

It will be a mixed-use of commercial, industrial, and institutional facilities that will have schools, buildings, and churches, among others.

“This is not for me, this is for my people, Consolacion must survive for the future. This is just a reaction of a pro-action on the part of the government, preparing something for the future of my people,” said Teresa.

A public hearing is one of the processes to obtain an environmental compliance certificate (ECC) which is one of the requirements for the implementation of a reclamation project.

Meanwhile, members of the Alliance of Fisherfolks, who come from the municipalities of Consolacion, Cordova, and the cities of Lapu-Lapu and Mandaue, stage a rally in front of the municipal hall to object to the proposed reclamation in Barangay Tayud.

The rally was held while a public hearing is ongoing at the amphitheater of the municipal hall.

Jimmy Sumalinog of the Alliance of Fisherfolks, said a few residents would lose livelihood claiming that there is still a lot of fish in the area.

Sumalinog said if the government wants to push through with the project they should relocate the affected individuals.

However, incumbent Mayor Joannes Alegado claimed that the waters in the area is already very dirty and that marine resources there were already scarce.

Mayor-elect Teresa Alegado added that they had conducted consultations with the residents in different barangays and the majority of whom or 74 percent of those being consulted approved of the project.     /rcg