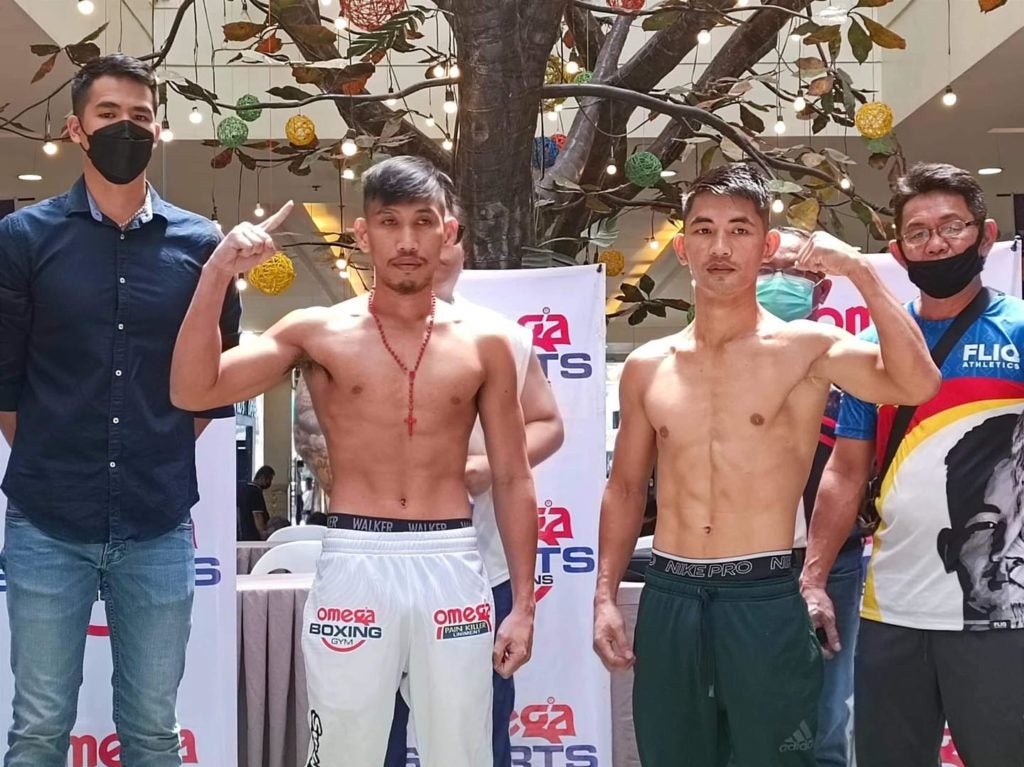 CEBU CITY, Philippines — The unbeaten and world-rated Mark “Rasta Mac” Vicelles and his opponent, Jaycever Abcede, promised Cebuano boxing fans an exciting showdown in their duel in the main event of “Kumbati 13” fight card tomorrow, Friday, June 17, 2022, at the Parkmall in Mandaue City.

Both Vicelles and Abcede passed the official weigh-in on Thursday, to schedule their 10-rounder 109-pound bout in the main event of the six-bout fight card.

The 26-year-old Vicelles tipped the weighing scales at 110.4lbs while Abcede weighed in at 111.2lbs.

The bout for Vicelles serves as a crucial tune-up bout as he waits for the World Boxing Organization (WBO) orders for a world title eliminator. Vicelles of Lebak, Sultan Kudarat is currently ranked No. 2 in the WBO’s light flyweight division.

He is also ranked No. 4 in both the IBF and WBC’s light flyweight division.

(In this fight, it will be a good fight against Abcede, he is strong and he has a lot of experience. So in this fight, I will try to win so that I can fight for a world title.)

Meanwhile, Abcede vows to do his best to snatch an upset victory in front of Cebuano boxing fans tomorrow.

(I will try my best to show all my boxing fans one good fight.)

Abcede, 27, is more experienced with 31 fights. He has 21 wins 13 by knockout along with 10 defeats. Abcede defeated Jay-r Tulinan last March in Lagonglong, Misamis Oriental.

For Castillo, only time will tell if OPSI can produce a world champion like what they did when their ex-boxer Jhack Tepora became the WBA interim world featherweight champion in 2018.

“Medyo dugay na jud last naa tay champion, sa Omega (It has been quite a while since we have a champion in Omega). Not only sa (in) Omega but from Cebu. For us the pure definition of a champion is the consistency. You can be a champion for a night, in the next fight, you just pass it. In my definition, a world champion is somebody who can sustain. As we all know, becoming a champion is very difficult. Boxing, is a sport we don’t play around with,” explained Castillo.

Currently, Omega Boxing Gym’s future of producing world champions is very bright. Aside from Vicelles, Christian Araneta who is fighting in the undercard tomorrow is ranked No. 5 in the IBF’s light flyweight division just behind the former.

In addition, Omega Boxing Gym has a promising prospect in Pete Apolinar who served as the sparring partner of pound-for-pound king and Japanese boxing superstar Naoya Inoue.

However, Castillo made it clear that it is a big task to produce such world champion which requires not just commitment but teamwork from everyone in their stable.

(To be honest, we cannot answer when we can produce a world champion. I am hoping that it will be in one of the nine professional boxers we have that we will become a world champion. For me, if it will come from us or from Cebu or sa Philippines, you can be a world champiion, it is a big honor for the country and to the other gyms as well.)

The fight card which will start at 4 p.m., has Araneta featured in the co-main event fighting against veteran Toto Landero in a 10-rounder bout. Both boxers passed the weigh-in so as the rest of the undercard bouts.