Ahong’s focus in the next 3 years: Revitalize tourism 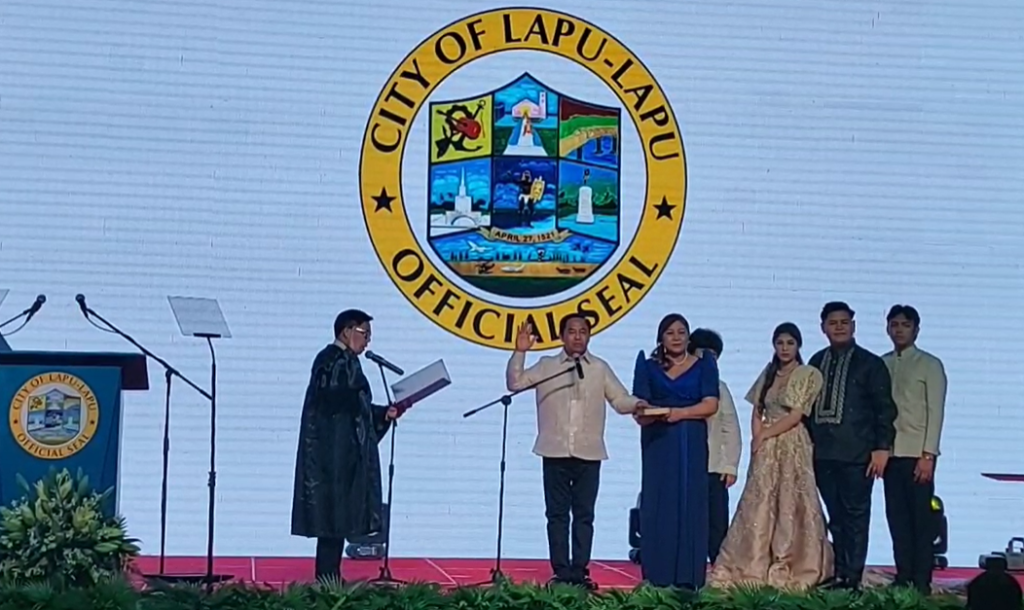 LAPU-LAPU CITY, Philippines – With another three years in office, Lapu-Lapu City Mayor Junard Chan said he hopes “to restore the tourism glory that we once had.”

“We are optimistic, that with a Cebuana at the helm of the Tourism Department in the person of Incoming Secretary Christina Garcia Frasco, the much needed boost to help revitalize tourism, is not far from sight,” he said in a speech which he delivered after he took his oath of office on Monday, June 27.

Chan and other candidates of Team Ahong-Team Libre, who were victorious in the May 9 local elections, took their oath of office in a ceremony that was held in a hotel in their city late afternoon on Monday.  Incoming Rep. Cindi King-Chan joined them in the said event.

“The Oponganons have spoken. The overwhelming mandate via landslide victory they have given me during the last elections is a testament of our able leadership, good track record, and sterling performance over the past 3 years of our first term,” Chan said during his speech.

Team Ahong-Team Libre won a landslide victory in the May elections.

Chan said leading the city in the last three years was a big challenge.  Working with an opposition-dominated Council was a tough job. Then, came the COVID-19 pandemic and Super Typhoon Odette.

“With a city flattened by Odette, we immediately created Task Force Odette to fast track clearing operations, delivery of relief and services, and hasten the recovery process. With our quick response in place and with the help of MECO and other leading government agencies, the City of Lapu-Lapu was back on its feet barely 2 months after the typhoon’s onslaught,” he said.

Chan said he was also able to deliver his campaign promises which included the need to bring medical and dental consultations closer to the people through his “Libreng Serbisyo Program” and “Bayanihan Projects.”

He made a promise to expedite the construction of the new Lapu-Lapu City Hospital and procure state of the art medical equipment, which he did.

“Once completed, Oponganons living in danger zones will now have a safe and decent home for their family,” Chan said.

The Lapu-Lapu City Mayor said that he was also able to implement several other projects in the last three years. These included the electrification of Olango Island 24/7 in coordination with the Mactan Electric Company (MECO), making the island a viable eco-tourism destination and the establishment of fish cages there as an alternative source of livelihood, among others.

Chan said that because of his “hands-on leadership,” the sacrifices made by the medical frontliners and the cooperation of the Oponganons, the City was able to surpass challenges caused by the pandemic.

He said that he did not stop in his efforts to lead the city’s fight against COVID -19 even after he tested positive of the infection.

As they slowly recover from the pandemic, Chan said, they are also focusing on the need to also revitalize tourism in their City.

“Being a tourism city, our economy is largely dependent on tourist arrivals. With the closure of hotels, resorts and other tourism-related establishments leaving thousands jobless, our management skill has been put to test. The pandemic has left me with an entire city to feed,” he said.

Read Next
Typhoid in Barili may be caused by poor sanitation