The Mass was held at the San Miguel Parish Church inside the Malacañang compound and was celebrated by Manila Archbishop Jose Cardinal Advincula and attended by several high-ranking officials of the Cabinet.

In his homily, Advincula called on the two top leaders to emulate the two traits of the Good Shepherd, such as the “listening leadership and life-giving leadership.”

“As we meet in our offices and conference halls asking questions in our heads, may we be mindful of our people who ask questions on their empty stomachs,” he said.

“May we be leaders who listen to our people, especially the poor and marginalized,” he added. 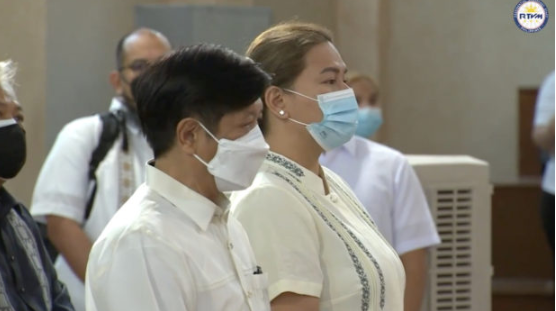 Further, Advincula offered prayers for the two leaders to “spend yourselves in the service of the common good” while being “guided by truth.”

The prelate likewise urged the public to pray and rally behind the country’s leaders.

(My countrymen, in the spirit of Bayanihan, let us all love and serve our country. Let us pray for our leaders and rally behind their good intentions and plans.)

(They need our prayers and cooperation so that their victory will bear fruits that are good for us all.)