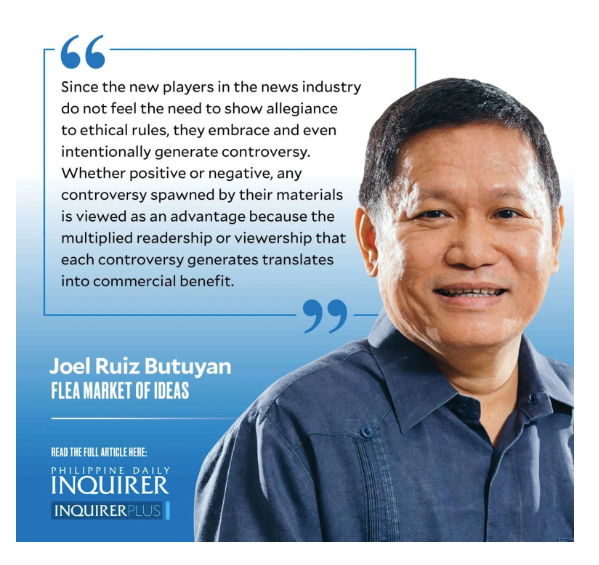 Our traditional sources of news present their report of current events with efforts to show objectivity and neutrality. However, their straightforward way of reporting current events or historical episodes produces what is referred to as “hard news.” Journalists who work in traditional media institutions are guided by unwritten but long-observed rules that discourage, or at least minimize, embellishment and bias.

Of course, some comment or analyze news events with their own slant, but they are clearly delineated as opinion writers or editorial commentators. There are also those churn-out materials for entertainment that are embroidered with figurative ornaments, so to speak, but they’re openly delineated as entertainment, literary, lifestyle, or non-news materials.

In contrast, the new news providers have adopted the practice of converging news and entertainment into a hybrid form of “infotainment.” Their report of current events can be branded as “soft news” because it is filled with entertainment elements and biased commentary. Liberties are even taken in infusing lies or fake facts in these infotainments. Because these new players do not operate as part of news organizations, they don’t feel any obligation to follow rules that traditional journalists are beholden to.

Since the new players in the news industry do not feel the need to show allegiance to ethical rules, they embrace and even intentionally generate controversy. Whether positive or negative, any controversy spawned by their materials is viewed as an advantage because each controversy’s multiplied readership or viewership translates into a commercial benefit.

Because new players have become very effective in attracting droves of followers, and they feel uninhibited in playing the role of mercenaries in doing the bidding of paying sponsors, they’re now viewed as effective instruments of propaganda. And with the election of our country’s new president viewed mainly as being due to the spread of infotainment sources, the status of these new players in the news industry has been enhanced multifold.

Our society’s literati continue to rely on the traditional media for their news and information supply, but their dwindling ranks have rendered their societal voice inconsequential. As a result, large segments of our countrymen are shifting to the new players for their dose of infotainment. This doesn’t bode well for our society. This will further muddle up our already distorted concepts of truth and falsehood and our already warped belief in good and evil.

We can have fake leaders and fake anything, but we will still somehow survive because our perception of reality will serve as a guidepost in fixing the mess in our lives. But when information about our reality—our supply of news—is systematically twisted and deformed, the resulting altered view of our reality will destroy the vital threads and fabrics of our way of life.

Read Next
Nietes loses to Ioka via UD; PH still without world champion