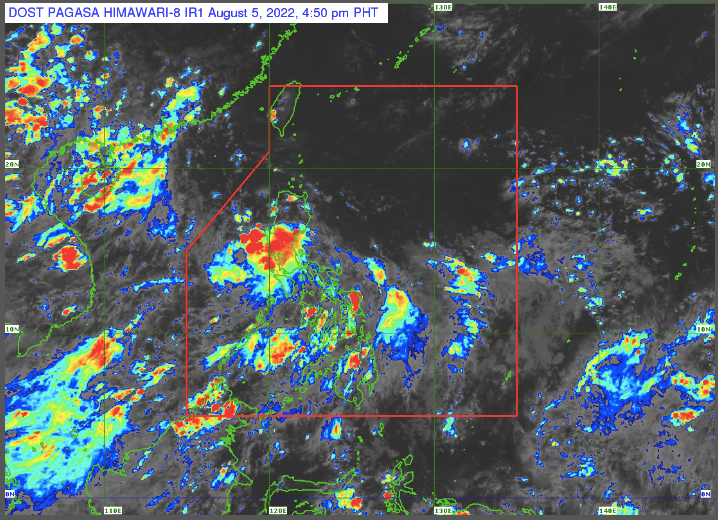 The HIMAWARI-8, a geostationary weather satellite, according to Pagasa, is the most utilized satellite imagery in real-time weather forecasting, tropical cyclone analysis, and research purposes. | Photo screen shot from Pagasa official website | Wenilyn B. Sabalo

CEBU CITY, Philippines — Partly cloudy to cloudy skies with isolated rain showers or thunderstorms will remain in Cebu for this weekend.

Jhomer Eclarino, a weather specialist at the Philippine Atmospheric Geophysical and Astronomical Services Administration (Pagasa) stationed in Mactan, Cebu, said the weekend weather this Saturday, August 6, 2022, until Sunday, August 7, 2022, will most likely be the same to the rainy weather condition the island experienced over the past few days.

This, as the combined effects of a Low Pressure Area (LPA) and Habagat (southwest monsoon), continue to prevail over the Visayas, including some parts of Luzon and Mindanao.

“Mag prevail ito until this weekend, and possibly next week, Monday, much improved na yung panahon natin,” he added.

As of 3:00 p.m on Friday, the LPA was estimated, based on all available data, to be in the vicinity of Doña Remedios Trinidad, Bulacan.

ThePagasa, however, said that the LPA is less likely to develop into a tropical cyclone in the next 24 hours.

Meanwhile, Eclarino also reminded Cebuanos, especially those in danger zones, to be vigilant of possible landslides and flash floods.

Eclarino noted that with the amount of rainfall in the past few days, the soil here is already saturated.

He said Cebu has already surpassed the average normal rainfall amount for the entire month of August just five days into the month.

Each mm of rain is equivalent to 5,000 drums of rain per square kilometer.

He also advised the public to heed the safety advice of the local government authorities to avoid accidents.   /rcg