CEBU CITY, Philippines — Thousands of students and parents flocked to various distribution sites in Cebu City to claim their educational assistance from the Department of Social Welfare and Development (DSWD) on Saturday, August 20, 2022.

According to DSWD in Central Visayas (DSWD-7), the payout for Cebu City-north barangays scheduled for today’s distribution — barangays T.Padilla, Carreta, Day-as, Hipodromo, Lorega, Mabolo, and Tejero — will be at the T.Padilla Gym, while those from Cebu City-south scheduled for today’s distribution — barangays Calamba, Guadalupe, Labangon, Punta Princesa, Quiot Pardo, and Tisa — may claim their assistance at Guadalupe Gym.

The DSWD-7, however, has asked those, whose barangays were not yet included in the schedule of the payout, to wait for further announcements on when they can start claiming their assistance. 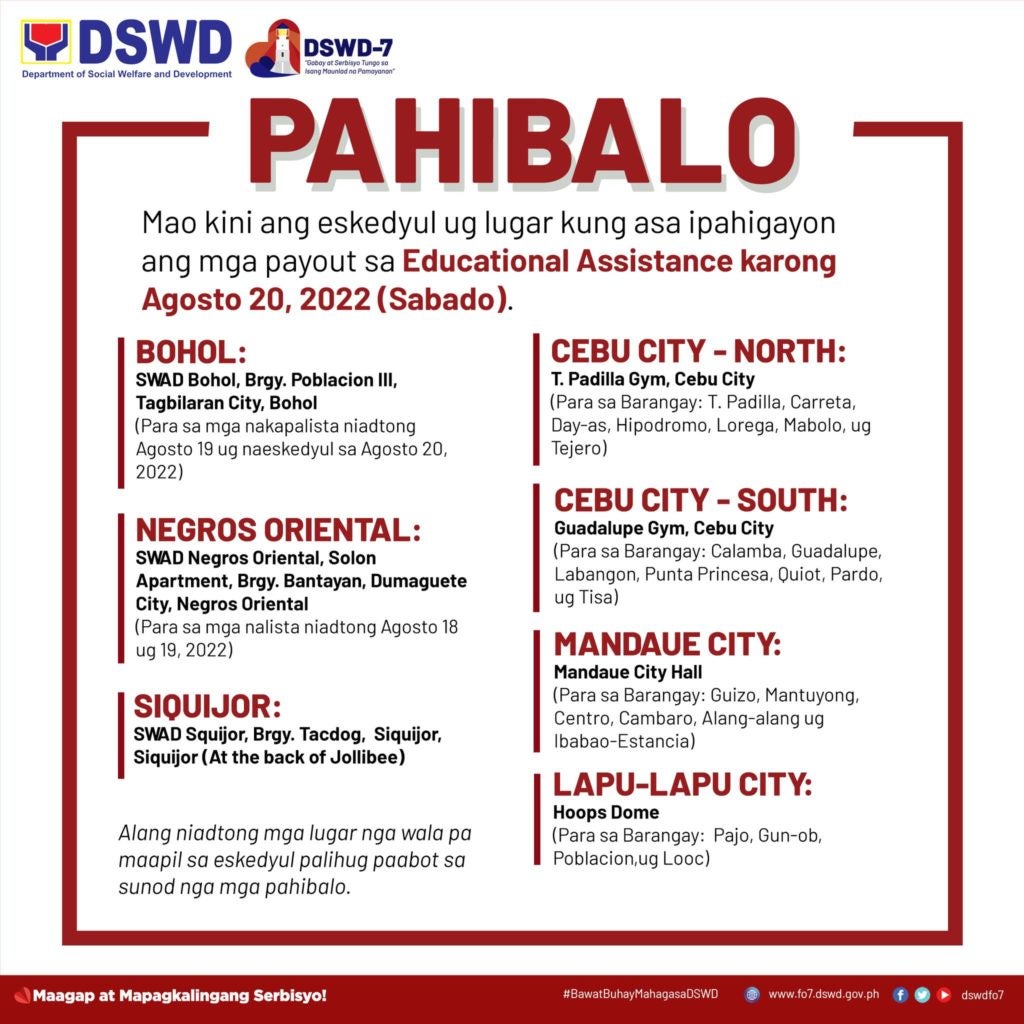 While reports of an allegedly chaotic financial aid distribution in the DSWD central office appeared, some local government units here in Cebu said their distribution were orderly so far.

Mandaue City Mayor Jonas Cortes, in a social media post on Saturday, August 20, uploaded some scenes from the distribution of education assistance from the DSWD to students in crisis in Mandaue City this Saturday.

The distribution was made at the City Hall grounds.

(Since the distribution started early in the morning, we also offered free lugaw (porridge) and pospas (gruel with meat) so that those our brother Mandauehanons will not be hungry in processing their assistance now.)

Earlier in an Inquirer report, Social Welfare Secretary Erwin Tulfo announced that the agency would distribute a one-time educational assistance to indigent students.

He said that up to three students per family could avail of the cash assistance.

To claim their assistance, Tulfo said they would only bring an enrolment certificate or a school ID to their local DSWD offices, which had designated sites for distribution of the educational assistance.

He also said that the distribution would start on August 20 and every Saturday thereafter until September 24.