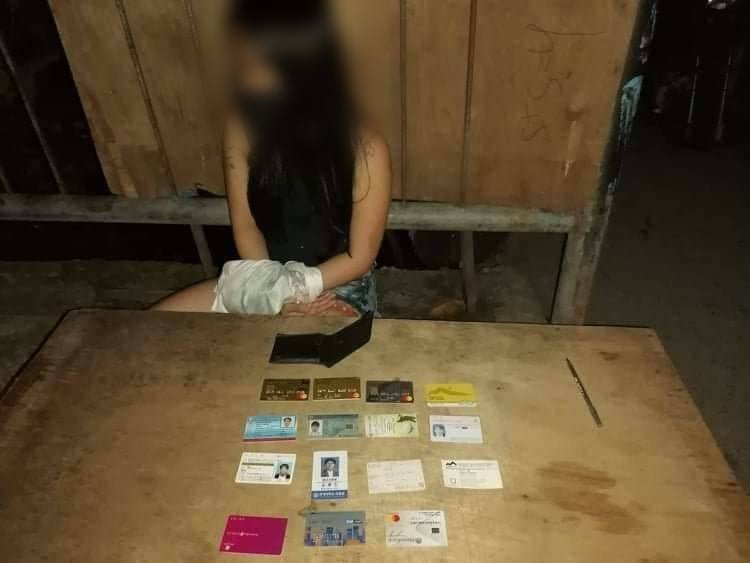 An alleged ‘noted’ snatcher and drug personality was arrested on Sunday evening, August 21, 2022, in Cebu City. | Photo from Abellana PS

CEBU CITY, Philippines — Police hope that the arrest of an alleged ‘noted’ female snatcher and drug personality will help address theft and snatching problems in Cebu City, particularly in the areas under the Abellana Police Station.

Police Major Nolan Tagsip, chief of Abellana Police Station, said that Tañag is a leader of a group that allegedly operates in areas near General Maxilom Avenue.

“She is the brain, siya ang nakapadagan sad ani,” he concluded. (she runs the group.)

Barangays Capitol Site, Cogon Ramos, Kamputhaw, Sambag 1, Sambag 2, and Santa Cruz, are among the villages under the jurisdiction of the Abellana Police Station.

Police confiscated 13 grams of ‘shabu’ from the Tañag, which is worth P88, 400. Aside from that, they also recovered various identification cards, sim cards, ATM cards, and an iPhone.

Hours before her arrest, Tagsip said that a Singaporean national went to their station past midnight on Sunday to report that his phone was stolen.

Tagsip said that when the Singaporean victim described the suspect who took his cellphone, they already had an idea who was the culprit since the description fit a suspect that they were monitoring for illegal drugs.

(When he described the girl, who he said had a motorcycle and had a gay companion, sometimes none, and had a tattoo in her arms, when the Singaporean gave that description, we had an idea who stole from him.)

Tagsip said that it took at least a month of case build-up before the suspect agreed to transact with their poseur buyer. Allegedly, the woman disposed of the illegal items in areas near Barangay Sambag 2 in Cebu City.

Tagsip encourages the victims of Tañag to go to their station to file appropriate complaints against her.

He also said that the suspect belongs to a similar group that helped her with both the illegal drug transactions and snatching. However, Tagsip said that there is a possibility that some of her accomplices already left Cebu City after her arrest.

READ: Suspect caught snatching on a video is nabbed in Cebu City buy-bust