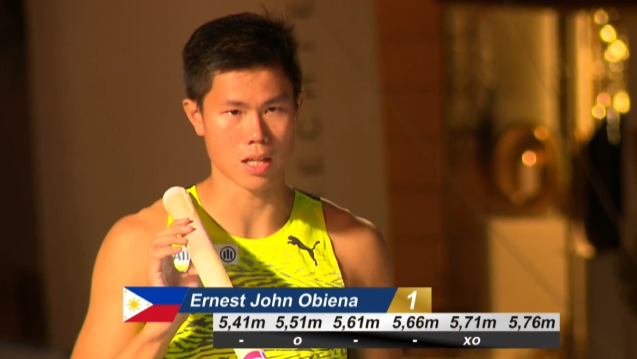 EJ Obiena during the Golden Fly Series. | Screen grab from the live streaming

The 26-year old Obiena, the world No. 3 pole vaulter finished with a best, 57.1-meters, and was close to clearing the 6-meters, but eventually faltered.

Obiena continued his medal streak this month. It can be recalled that he bested the world’s top pole vaulter Armand Duplantis by winning the gold medal in the Diamond League in Brussels, Belgium on September 2.

He went on winning a silver medal in the Internationales Stadionfest (ISTAF) Berlin two days after.

In August 31, 2022, Obiena bagged the gold medal in the St. Wendel City Jump, and prior to that, he also topped the 2022 True Athletes Classic at the Manforter Stadio in Leverkusen in Germany on August 25.