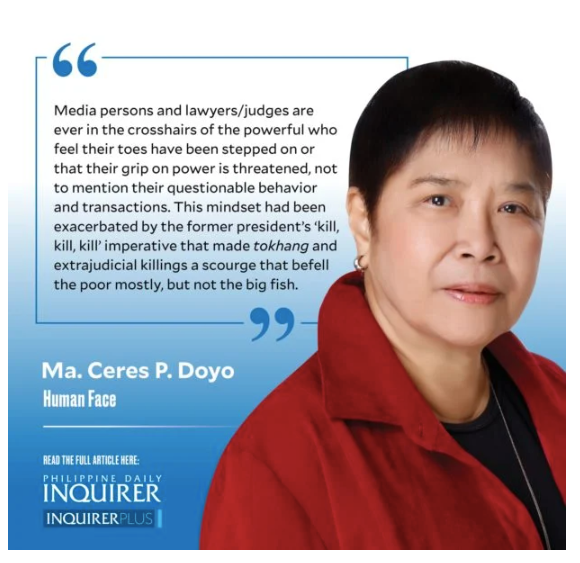 A most profound question one writer asked a revolutionary fighter, who survived the battle of his life, was not how bloody difficult it was or how he won the battle. It was: “Were you afraid?”

Were you afraid? That question could very well be thrown at us journalists, who have encountered danger while on difficult coverages or when simply writing dangerously, as we often find ourselves doing. This comes to mind in the wake of the murder last Oct. 3 of Percy Lapid, who was known for his “Lapid Fire” radio program. He was the 197th media person to be murdered since 1986. I also think of Quezon-based Inquirer colleague Delfin Mallari (he who calls himself ”peryodistang promdi”), who still has a bullet lodged in his back.

After I learned about the murder of broadcaster Lapid, who was a critic of both former president Duterte and the current one, I posted on Facebook a photo of a fiercely blazing sunset on the Metro Manila skyline that I took the day before while coming down from the hills of Tanay. I captioned it with Dylan Thomas’ famous line: “Rage, rage against the dying of the light.”

The murder comes in the heels of one former government undersecretary threatening a judge whose decision on the use of the terrorism label she did not agree with. In a very rare move, the Supreme Court issued an order compelling the said undersecretary to explain why she should not be charged for her threat.

Media persons and lawyers/judges are ever in the crosshairs of the powerful who feel their toes have been stepped on or that their grip on power is threatened, not to mention their questionable behavior and transactions. This mindset had been exacerbated by the former president’s “kill, kill, kill” imperative that made tokhang and extrajudicial killings a scourge that befell the poor mostly, but not the big fish.

There is a continuing vigorous exchange on social media on the role of journalists in this day and age vis-à-vis influencers who use social media to deliver opinions, and sometimes unverified information, for the benefit of their principals while invoking the right to freedom of expression. Bashing journalists, fact-checkers, and truth tellers has become the paid preoccupation of many on social media.

Someone posted clips of journalists covering life-threatening situations with the caption “Journalists show up even in the worst of times.” Yes, journalists risk life and limb to deliver the news, and do not merely sit in an ivory tower to comment on what is going on below. Sure, we get salaries from our media organizations only, but I consider journalism and writing not as a career or livelihood but as a calling, a vocation.

Vloggers and so-called media influencers may also be getting paid by whoever they support or are monetizing their posts, but they are not working journalists. This is not to scoff at what they are doing. Journalists adhere to a code of ethics and are equipped with investigative skills honed by years of reporting. We are not academics writing from air-conditioned rooms, but we draw much on our varied academic backgrounds and continuous training.

One of my favorite movies about true-to-life journalism is “A Private War” (2018), based on the life and death of war correspondent Marie Colvin played by Rosamund Pike. An American, Colvin wrote for the British newspaper The Sunday Times.

Movie notes: “Celebrated war correspondent Marie Colvin is a woman who is as comfortable downing martinis with high society’s elite as she is brazenly staring down warlords and fleeing from gunfire. Driven by an enduring desire to bear witness and give voice to the voiceless, Colvin charges into danger, constantly testing the limits between bravery and bravado.”

Colvin lost an eye during an ambush in Sri Lanka, but she simply returned to the war zones with an eye patch. She died in 2012 while covering the siege of Homs in Syria. She was 56. In 2019, her family was awarded $302 million in damages after it was proven in court that the Syrian government had directly ordered her assassination.

Watch “A Private War” on Netflix. It got a high 88 percent rating from Rotten Tomatoes.

Journalism, it is said, is the first draft of history—if not history in the making itself. I sometimes go over the 3,000 or so magazine feature stories and profiles, long investigative reports, news reports, and column pieces I have written over the decades, and I can only give profound thanks to The One who made them possible. Ut in omnibus glorificetur Deus.