Pacquiao out to prove he’s still king of the ring 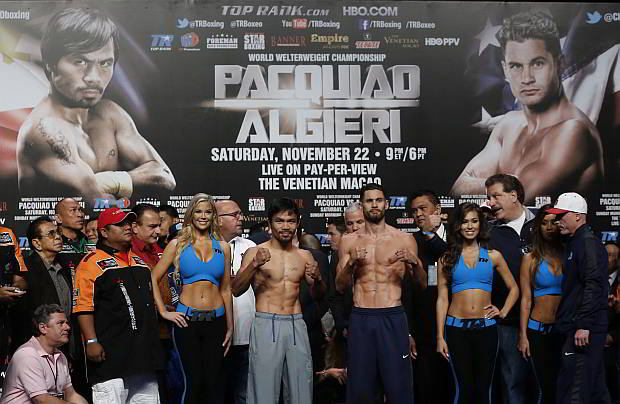 Manny Pacquiao looked up to Chris Algieri during their face-off yesterday. There’s a good chance, he’ll be staring down on the American challenger at the end of their battle for the World Boxing Organization welterweight crown  today.

Pacquiao has been tagged a 7-1 favorite in the HBO pay-per-view bout and the eight-division world champion is raring to prove that at 35 years old, he’s still king of the ring.

The 30-year-old Algieri, on the other hand, is hungry for glory despite being the WBO light welterweight champion. A major reversal over Pacquiao, a universal icon, is certain to make him boxing’s new poster boy.

That is, if Pacquiao won’t disfigure his handsome face in 12 rounds, or less at the Cotai Arena in Macau.

Having undergone seven weeks of what Hall of Fame trainer Freddie Roach described as a “perfect training camp” in General Santos City, Pacquiao is fired up and is certain of emerging triumphant despite his opponent’s glaring edge in height (four inches) and reach (five inches).

Algieri towers over Pacquiao at 5-foot-10 and boasts a 72-inch wingspan.

Pacquiao tipped the scales at 143.8 pounds on his first try, while Algieri had to check-in thrice to make the 144 catch weight limit.

When he first got on board, Algieri registered 144.4 pounds. He returned naked, his front covered only by his red and black jacket, and weighed 144.2 pounds.

After an hour of jogging inside his room and a visit to the toilet, Algieri finally made weight at 143.6 pounds.

Though his trainer, Tim Lane, put the blame on the calibration of the weighing scale, it was evident that Algieri struggled to make weight. The New Yorker of Italian and Argentine descent who was at 148 pounds early Friday, appeared gaunt, his blue eyes deep-set and his color pale.

OVER IN ONE ROUND

Roach was more vocal, predicting an end to Pacquiao’s five-year knockout drought and giving Algieri zero chances of winning. Showing little respect for Algieri’s skills, Roach said the fight could be over in one round.

Especially with Pacquiao, the fire on his eyes back, seemingly on a zone during training camp.

“Manny has told me he will knock him out in one round. He won’t repeat that, but he has that kind of confidence in him. I feel great about this fight,” Roach said.

Not to be outdone, Lane is also claiming a stoppage win for Algieri, who isn’t really a heavy hitter basing from his eight knockouts in 20 wins. Lane said the knockout, if ever, will come in the 10th round.

Algieri isn’t discounting the possibility of stopping Pacquiao either. He believes if he can hurt Pacquiao, he can stop him.

“When I look into the mirror I know I’ve done all the work necessary to win this fight,” said Algieri, who holds a master’s degree in clinical nutrition. “I’m sure that Manny realizes this will be a real fight.”

Surrounded by his family, friends, relatives and supporters, some 350 of whom were flown in by two AirAsia airbuses Monday, Pacquiao is at peace with himself.

He’d trained as hard as he could, willed himself to be fiery and ferocious again, and is excited to flaunt his familiar speed and enhanced power brought about by pounding the heavy bags more.

What could be Pacquiao’s extra weapon, however, is his intense desire to win the world back on his side.

The Fighter of the Decade feels he can only do that by showing his trademark aggression and explosiveness.

Pacquiao knows an impressive win over Algieri will further pushed Floyd Mayweather Jr. to the wall, leaving his pound-for-pound rival little option but to agree to an overdue megabuck showdown next year.

Returning to this gambling and tourism haven for the second time, Pacquiao, who dominated Brandon Rios here last year, stands to earn a guaranteed $20 million.

Algieri, former kickboxing champion and holder of a masters degree in nutrition, will pocket $1.6 million, which will be more than enough if ever he pursues his dream of becoming a doctor.

In a break from tradition, a group of pastors, not an individual, will be singing the Philippine national anthem. But really, nobody cares.

As long as Pacquiao wins, Filipinos back home and all over the world will erupt in celebration./ with AP reports