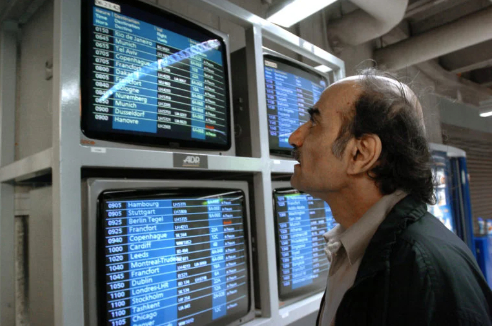 BOBIGNY, France — An Iranian who got stuck for 18 years in a Paris airport, inspiring a Steven Spielberg movie starring Tom Hanks died on Saturday at the terminal, an airport official said.

Caught originally in an immigration trap — unable to enter France and with nowhere to go — he became dependent on his unusual place of abode and increasingly a national and international cause celebre.

He called himself “Sir Alfred”, and a small section of airport parquet and plastic bench became his domain.

Hanks played a man who becomes trapped at New York’s JFK airport when his home country collapses into revolution.

After spending most of the money he received for the film, Karimi Nasseri returned to the airport a few weeks ago, the official said.

Several thousand euros (dollars) were found on him.

Born in 1945 in Masjed Soleiman, in the Iranian province of Khuzestan, Karimi Nasseri, took up residence in the airport in November 1988 after flying from Iran to London, Berlin and Amsterdam in an effort to locate his mother.

He had been expelled from every other country he landed in because he was unable to produce the correct paperwork.

At Roissy-Charles de Gaulle airport an informal support network grew up around him, providing food and medical help along with books and a radio.

In 1999 he was granted refugee status and the right to remain in France.

“I’m not quite sure what I want to do, stay at Roissy or leave,” he said after being handed the right to live in France. “I have papers, I can stay here, I think I should carefully study all the options before making a decision.”

He didn’t leave then.

“He no longer wants to leave the airport,” his lawyer Christian Bourguet said at the time. “He’s scared of going.”

The saga of the missing luggage

Read Next
RTC BRAVE, a registered volunteer group to help in peace and order