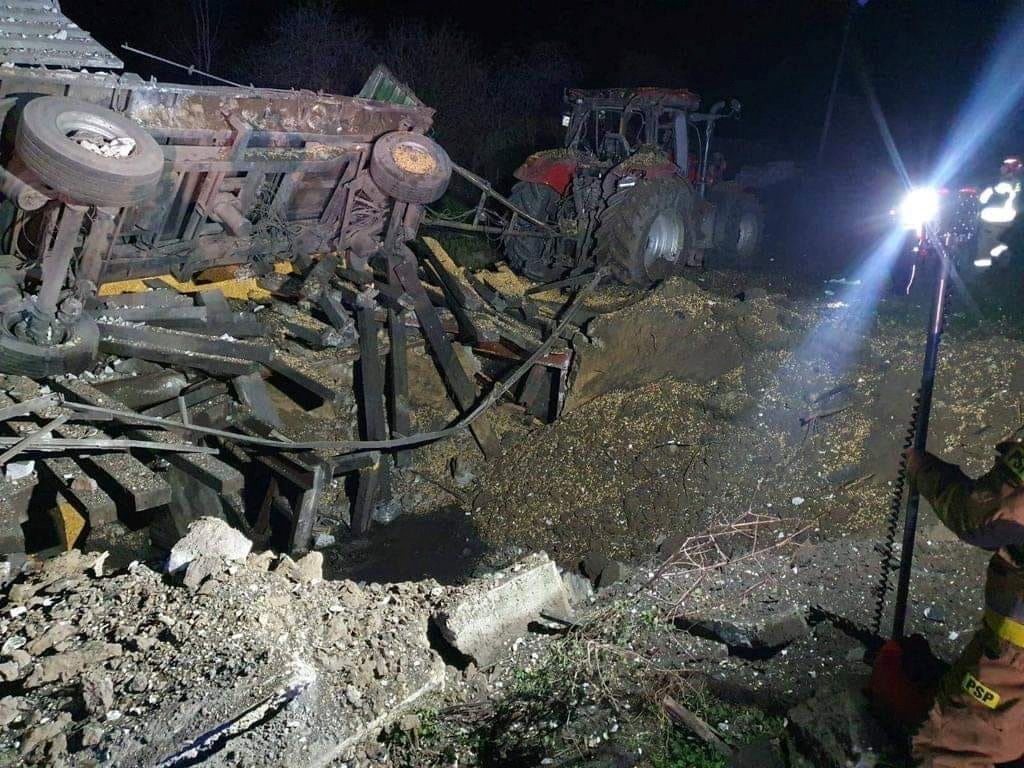 A view shows damages after an explosion in Przewodow, a village in eastern Poland near the border with Ukraine, in this image obtained from social media by Reuters released on November 15, 2022

WARSAW/BRUSSELS/NUSA DUA, Indonesia – A missile that hit Poland was probably a stray fired by Ukraine’s air defences and not a Russian strike, Poland and NATO said on Wednesday, easing global concern that the war in Ukraine could spill across the border.

Nevertheless, NATO’s chief said that Moscow, not Kyiv was ultimately to blame, for starting the war in the first place and launching the attack that triggered Ukraine’s defences.

“This is not Ukraine’s fault. Russia bears ultimate responsibility as it continues its illegal war against Ukraine,” NATO Secretary-General Jens Stoltenberg told reporters in Brussels.

NATO ambassadors were holding emergency talks to respond to Tuesday’s blast that killed two people at a grain facility in Poland near the Ukrainian border, the war’s first deadly spillover onto the territory of the Western military alliance.

“From the information that we and our allies have, it was an S-300 rocket made in the Soviet Union, an old rocket and there is no evidence that it was launched by the Russian side,” Polish President Andrzej Duda said. “It is highly probable that it was fired by Ukrainian anti-aircraft defense.”

The incident occurred while Russia was firing scores of missiles at cities across Ukraine, in what Ukraine says was the biggest volley of such strikes of the nine-month war.

Kyiv says it shot down most of the incoming Russian missiles with its own air defence missiles. Ukraine’s Volyn region, just across the border from Poland, was one of the many Ukraine says was targeted by Russia’s countrywide attacks.

The Russian Defence Ministry said none of its missiles had struck closer than 35 km (20 miles) from the Polish border, and that photos of the wreckage in Poland showed elements of a Ukrainian S-300 air defence missile.

The Kremlin said on Wednesday that some countries had made “baseless statements” about the incident, but that Washington had been comparatively restrained. Spokesman Dmitry Peskov told reporters that Russia had nothing to do with the incident.

Hours after the incident, Ukrainian President Volodymyr Zelenskiy had blamed it on “Russian missile terror”, and on Wednesday Kyiv did not appear ready to concede that its own missile was involved. Oleksiy Danilov, Secretary of Ukraine’s National Security and Defence Council, said Kyiv wanted access to the site and still saw a Russian “trace” behind the attack.

However, news that officials had concluded the missile was Ukrainian brought some relief to the inhabitants of the Polish village where the missile struck, who said they had feared being dragged into the war.

“Everyone has in the back of the head that we are right near the border and that an armed conflict with Russia would expose us directly,” Grzegorz Drewnik, the mayor of Dolhobyczow, the municipality Przewodow belongs to, told Reuters.

“If this is an a mistake of the Ukrainians, there should be no major consequences, but I’m not an expert here.”

Some Western leaders at a summit of the G20 big economies in Indonesia suggested that whoever fired the missile, Russia and President Vladimir Putin would ultimately be held responsible for an incident arising from its invasion.

“They stressed that, whatever the outcome of that investigation, Putin’s invasion of Ukraine is squarely to blame for the ongoing violence,” British Prime Minister Rishi Sunak’s office said after a meeting between Sunak and Canadian Prime Minister Justin Trudeau on the summit sidelines.

Leaders at the summit issued a declaration saying “most members strongly condemned the war in Ukraine”, although it acknowledged that “there were other views and different assessments of the situation and sanctions”.

Russia is a member of the G20 and Ukraine is not, but Zelenskiy addressed the summit by video link, while Putin stayed home.

Moscow launched Tuesday’s wave of missile attacks just days after abandoning the southern city of Kherson, the only regional capital it had captured since the invasion.

In Kherson, residents in the central square on Wednesday barely took notice as explosions could be heard of Russian artillery firing into the city.