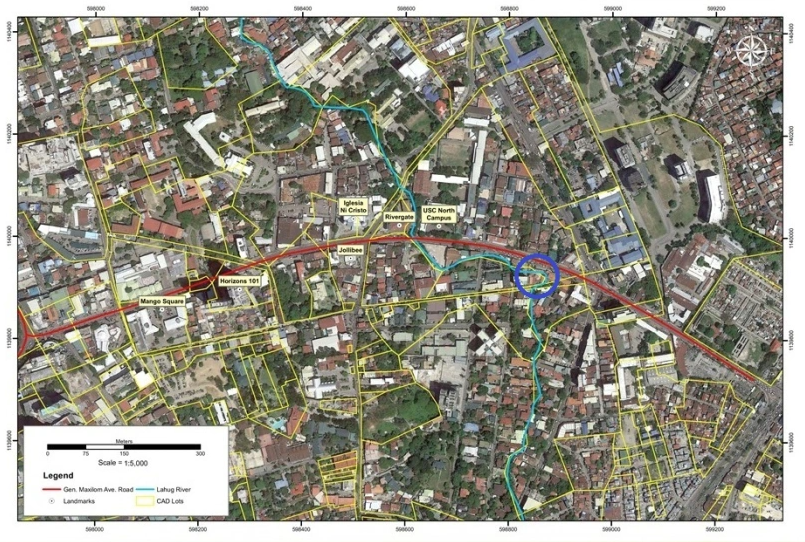 This Google Earth map shows in green where the Lahug-Kamputhaw River meanders. The encircled portion is where the two establishments are located.| from Cebu City PIO

CEBU CITY, Philippines — The Cebu City Government has given two big establishments along Gen. Maxilom Ave. 10 days or until December 3, 2022, to voluntarily dismantle a portion of their structures that encroached on the three-meter easement of the Lahug-Kamputhaw River.

In a report from the Cebu City Public Information Office (PIO), Task Force Gubat sa Baha commander and former environment secretary Roy Cimatu said they will serve a notice to WhiteKnight Hotel and LightHouse Restaurant for their violations on the three-meter easement of rivers.

The Task Force Gubat sa Baha held a meeting at the Office of the Mayor’s conference room on Wednesday, November 3, 2022.

“Matagal na kasi eto, and it should be about time na din to push through with this because we want to restore our rivers and if we don’t act we might lose our opportunity,” Cimatu was quoted in the PIO report.

The portion of White Knight Hotel encroaches on the nearby river, while the parking lot of Lighthouse Restaurant was constructed on top of the river.

The management of Lighthouse and WhiteKnight already consented to voluntarily dismantle a portion of their properties that encroached on the Lahug River.

However, they reportedly requested that the task force postpone the demolition during their initial meeting since they are still looking for ways to minimize the damage to both establishments.

However, Cimatu asserted that the two establishments had previously been given sufficient time to comply with the order.

Additionally, the Talisay City Administrator, who was a guest at the meeting, pledged Talisay City’s support for Cebu City in all of its undertakings, particularly the river restoration project.