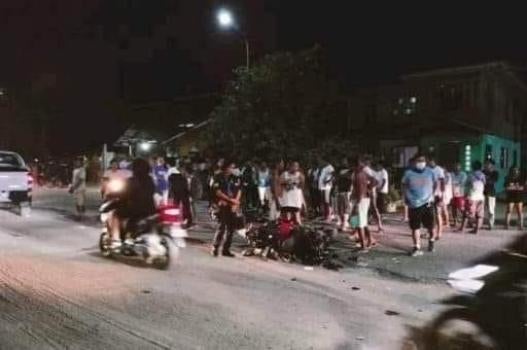 CEBU CITY, Philippines — The death of a 15-year-old boy, who was driving a motorcycle in a road accident on Wednesday, Nov. 23, in Argao town, southeastern Cebu, prompted a police officer to urge parents not to allow their minor children to drive vehicles — motorcycles or cars — to avoid this kind of tragic accident from happening.

(He should have been under their supervision because he is a minor.)

Tapales was referring to the guardians or parents of the minor victim for allowing him to drive a motorcycle.

Investigation showed that the minor victim, Arven John Cayanan, died of head injuries when his motorcycle collided with another motorcycle at the national highway on Barangay Tulic, Argao town at past 6 p.m. on Nov. 23.

Cayanan was not wearing a helmet at the time of the accident, and he was driving without a license because he was a minor, said Police Staff Sergeant Tapales.

According to the police investigation, the driver of the other motorcycle, Eulieboy Carillo of legal age, encroached on the other lane as he tried to avoid potholes on his side of the road in Barangay Bulic.

Carillo was heading south to Dalaguete proper while the minor victim was heading north. When they reached Barangay Tulic, Carillo suddenly swerved to the left, to the middle of the road, and encroached on the opposite lane, resulting to the collision of both motorcycles.

Both victims were rushed to the hospital for treatment.

However, the minor victim, Cayanan, of Barangay Usmad, Argao town was declared dead on arrival by the attending physician of the hospital.

The other motorcycle driver, Carillo, of Alambijud, Argao town was admitted to the hospital for treatment.

Tapales, during the phone interview today, said that Carillo was admitted to the hospital because he broke his leg in the accident, and that’s aside from his other injuries in the body.

He said that a policeman was monitoring Carillo at the hospital while the complaint of Reckless Imprudence resulting to homicide had not yet been filed because both parties were negotiating for an amicable settlement.

(The settlement talks are ongoing because the mother of the minor-victim is outside of the country.)

(Because the other party is willing to pay and settle this amicably.)

Again, Tapales advised parents not to allow their minor-children to drive vehicles such as motorcycles or cars to avoid getting them involved in road accidents that could lead to tragic consequences for the minors.