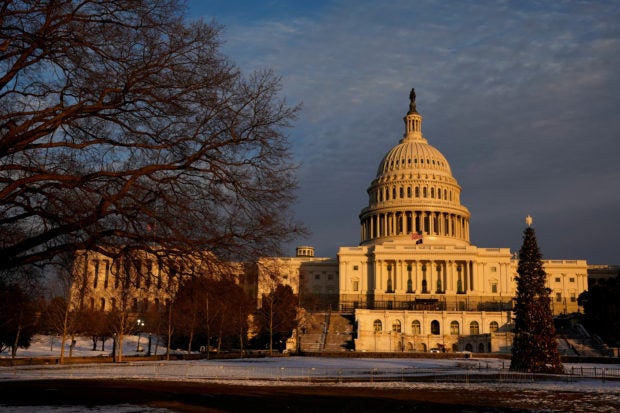 The US Capitol is seen at sunset on the eve of the first anniversary of the January 6, 2021 attack on the building, on Capitol Hill in Washington, US, January 5, 2022. REUTERS/Elizabeth Frantz/File Photo

WASHINGTON — The US Senate passed a bill on Tuesday that would protect federal recognition of same-sex marriage, a measure taken up in response to worries the Supreme Court could overturn a 2015 decision that legalized it nationwide.

The narrowly tailored bill, which would require the federal government to recognize a marriage if it was legal in the state in which it was performed, is meant to be a backstop if the Supreme Court acted against same-sex marriage.

It would not bar states from blocking same-sex or interracial marriages if the Supreme Court allowed them to do so.

The bill will give “millions of same sex and interracial couples the confidence and certainty that they need that their marriages are and will in the future continue to be valid,” Democratic Senator Tammy Baldwin, one of the lead negotiators on the bill, said ahead of the bill’s passage on Tuesday.

Baldwin is the first openly gay person elected to the US Senate.

A similar, but not identical, bill passed the House of Representatives earlier this year with support from 47 Republicans and all Democrats. The House would need to approve the Senate version before it is sent to President Joe Biden to sign into law.

No. 2 House Democrat Steny Hoyer told reporters on Tuesday the House would likely take up the Senate’s version of the bill next week.

In June, the Supreme Court overturned the nationwide right to an abortion, undoing 50 years of precedent.

In a concurring opinion, Supreme Court Justice Clarence Thomas wrote the court should consider reversing other decisions protecting individual freedoms, including the 2015 ruling on gay marriage.

About 568,000 married same-sex couples live in the United States, according to the US Census Bureau.

Cebu’s LGBT not yet lobbying for same sex marriage

Your subscription could not be saved. Please try again.
Your subscription has been successful.
Read Next
Shangri-La Mactan opens ‘Tropical Holidays’ celebration with Christmas tree lighting ceremony