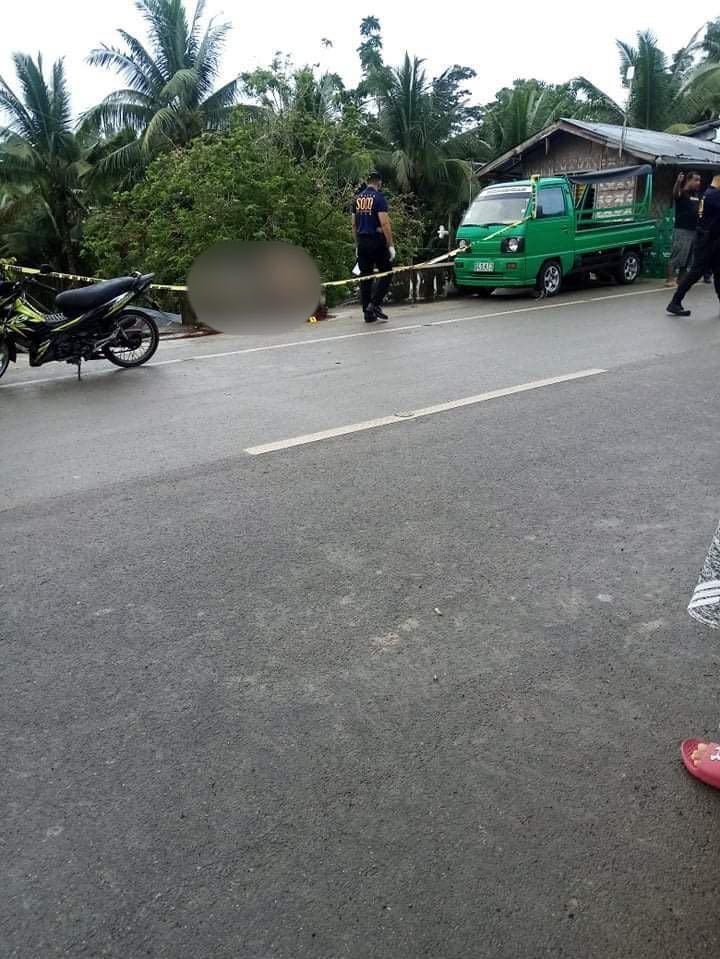 A man, who was allegedly drunk, was found dead with hack wounds in his body this morning, Jan. 23, in Brgy. Bato, Sibonga town in southern Cebu. | Contributed photo via Paul Lauro

CEBU CITY, Philippines — Police have identified five persons of interest (POIs) in the death of a man, who was found with hack wounds in his body this morning, Jan. 23,  along the road of Brgy. Bato, a mountain barangay of Sibonga town in southern Cebu.

Police Senior Master Sergeant Michelle Ponce, investigator of Sibonga Police Station, said that they had tagged five men as POIs because they were seen drinking in the area where the victim, Elmer Redillo, 51, a farmer, was killed.

(We have persons of interest. Those who were seen having a drinking session near the area (where the victim was killed).)

Atop concrete barrier in Sibonga

Redillo was found dead lying atop a concrete barrier at the side of the road at past 5 a.m. today in Brgy. Bato of the southern town. He was found with hack wounds on his chest and neck.

Ponce said that initial investigation showed that the victim was last seen by his uncle on Sunday night, Jan. 22, at past 10 p.m.

The victim, Redillo, was allegedly drunk and was walking back and forth outside his uncle’s house talking to himself and shouting.

(The victim has a habit being difficult to handle and to complain in a loud voice and yell when he is drunk.)

Ponce said that the weapon used to kill the victim was probably a bolo.

(It seems that the weapon used was a bolo. His (the victim’s) wounds were deep.)

The victim’s 72-year-old uncle told police that Redillo usually behaved like that when he was drunk. So the uncle did not mind him that night as this would stop when no one would talk to the victim.

The uncle, however, said that as he was about to sleep, he heard a loud noise outside and this was followed by silence, but he did not mind it and went to sleep.

The next day, at past 5 a.m., the uncle went outside his house and checked the area where he last heard the loud noise and was surprised to see his dead nephew lying atop concrete road barrier with several hack wounds in his chest and neck.

The victim’s uncle immediately called the police for assistance, who responded to the area.

As of this time, Ponce said that they continued to investigate and find out what really happened and who the assailant or assailants were.

She said that they hoped that the five persons of interest could shed light on the crime.

What is a POI?

In a previous interview, a police official said that a person of interest (POI) was one who could possibly give information or shed light about a crime or about what happened.

He said that if you are a person of interest or a POI, then you should coordinate with the police.

However, he said that the police could only invite the POI to visit the police station for questioning about a certain incident or crime.

He also clarified that a person of interest is not a suspect of a crime.

Sibonga is a third class municality of Cebu Province, which is approximately 50 kilometers south of Cebu City.

Read Next
PDEA-7 exec: Only 48% of CV barangays remains drug-affected