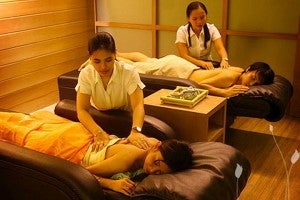 Therapists massage their clients in a spa. (bodyandsole.ph)

Seeing a still huge prospect for wellness businesses in the country, homegrown company Body & Sole Franchise Corp. will be introducing a pooled investment scheme which will offer opportunities for startup investors to run their own spa.

In an interview last week, Body and Sole Franchise Corporation president and chief executive officer Johnie Lim said that this is an experimental move for his company which has built the Body and Sole brand over the years with over 40 outlets now around the country.

“This is called crowd funding and I got this idea from my teaching in University of San Carlos, it’s like a cooperative system where 20 investors pool resources to setup a spa and become shareholders of the company,” he said.

Lim said the 20 investors which includes him and 19 other will invest P25,000 each to co-own a Body and Sole outlet.

The pilot outlet will be a 100 square-meter spa that can accommodate 10 to 15 beds.

According to Lim, he has prospective investors already who have expressed interest to join in the project who he met first through Facebook.

“I promoted this in Facebook already, and I have serious investors. What I’m looking for from my partners is that they will be willing to learn the business and not just put in money. This is a way for them to learn how to operate a spa because I will also be giving some seminars and workshops,” he said.

The investors will have  regular meetings and will earn through the profits made in the spa on equal sharing, he said.

He said that this new business concept would allow him to spark the entrepreneurial spirit of Filipinos especially that one of the barriers for Filipinos to get into a business venture is the lack of capital.

“Learning the business comes naturally if you are really interested to know and to succeed, but the problem is on capital. This is a big help for them especially for those who still don’t know how to run a spa.”

If an investor then will want to invest in the spa business, they can then buy a franchise of Body and Sole and they can sell their shares from the first business.

To protect the business, Lim said that each investor will also be issued a certificate of investment and will have to agree to be mentioned in all social media and will not be allowed to venture into a similar business.

“The business will be registered under the Entrepreneur 20 as a legitimate business venture,” he said.