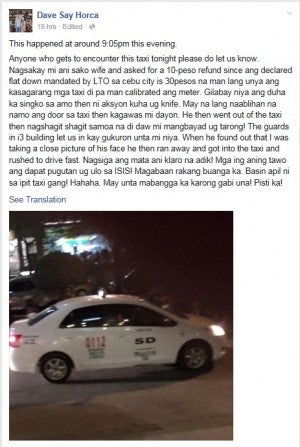 The Cebu City taxi driver who was accused of poking a knife and threatening  at a couple who asked for  a P10 discount on the flag down rate denied harassing them.

“Dili baya ko criminal (I am  not a criminal),” said 45-year-old Joel Ramos in Cebuano.

He swore that the  couple, two call center agents who road his cab to IT Park on Monday night,  were lying.

He said he was willing to face Dave Say Horca and his wife before the Land Transportation Franchising and Regulatory Board (LTFRB), which has summoned him to answer a complaint for overcharging and grave threats.

Ramos, however, admitted yelling at the couple when he saw Horca take his photo with a cameraphone after getting off at IT Park past 9 p.m.

For this, the driver from Consolacion town said he was “sorry”.

Horca told Cebu Daily News he would pursue charges against Ramos and would not  accept  his apology even if the driver would kneel before him.

“They shouldn’t allow that man  to continue  driving a taxi,” said the call center agent, who posted his account of  the encounter with a belligerent  taxi driver on Facebook, including a shot of the taxi with its body number visible.

“My wife is worried because the driver knows my face now,” Horca said.

A security guard  at i3 building in I.T Park told Horca the taxi driver returned to the  building at night looking for him.

Horca said he’s wary that the driver would pretend to try to apologize just to get near him.

He and his wife took the taxi from their home in Escario Street to IT Park for the wife to report for work on the graveyard shift.

After she paid P100 , she asked the driver if he was aware of the P10 flag down  rollback since they did not get the right change.

The couple said the driver angrily threw two P5 coins  at them,  pulled out a knife and threatened them, saying “Mosukol mo? Isog ba mo?”

Horca said the driver’s red eyes and fury made him suspect Ramos was high on drugs.

Horca  reported the incident to Mabolo Police Station and LTFRB 7, which traced the identity of the driver and operator through the cab’s body number.

Overcharging draws a fine of P1,000 for the driver and P5,000 for the operator for a first offense.

In a dyLa interview, an emotional Ramos denied the allegation.

He said he cried when he read newspaper reports about the incident.

(I read about it in the news.  What he did was unfair.  He humiliated me.  I’m not a criminal.  I cried and asked why he had to do this to me.  My wife is very disturbed. )

Ramos said it was Horca who was arrogant and demanded a P10 discount.  The driver said he would deduct it from the metered ticket amount but Horca allegedly confronted him why he did not have an ID or LTFRB-issued sticker that announces the fare rollback.

With the controversy, the management of SD taxi advised him to temporarily stop driving until the issue is resolved.

SD Taxi liaison officer Leny Goc-ong said RamosP1,000 fine for overcharging taxi driver is a good taxi driver and the management has no problems with him.

Read Next
Passengers should remain seated while vessel docks