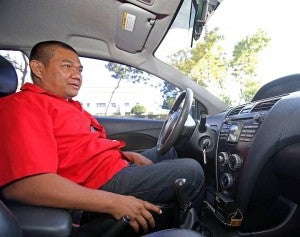 Taxi drivers like Renilo Taniola will have to contend with the P10 provisional fare reduction after the Land Transportation Franchising and Regulator Board (LTFRB) denied the request of taxi operators to suspend the fare rollback. (CDN PHOTO/ LITO TECSON)

THE provisional fare reduction of P10 for taxi will remain after the Land Transportation Franchising and Regulatory Board (LTFRB) denied the request of a  group of taxi operators from Manila, Cebu, Iloilo and Panay to suspend the P10 fare rollback.

The Philippine National Taxi Operators Association filed a motion asking the LTFRB  to reconsider and set aside the P10 provisional fare reduction.

The group  said  LTFRB erred in ordering the provisional fare reduction only on the basis of the reduction of fuel prices because they ignored several other important factors.

But during the hearing of the motion in Manila yesterday, the oppositors asked that the P10 rollback be suspended.

He cited that the reduction of prices for spare parts and other factors were among the reasons the provisional rate reduction must remain.

The reason cited in the order was the reduction of oil prices.

Inton said the P10 reduction is temporary since LTFRB will still convene on Monday for the final resolve on the motion for reconsideration.

“To be honest, it’s very hard to come up with a resolution because prices of gasoline are also moving,” Inton said.

In the meantime, Inton is encouraging the drivers and operators to follow the order.

“Please, to the drivers and operators, respect the provisional order and follow it,” Inton said.

Drivers who will refuse to give P10 less to its passengers will be penalized P1,000 for overcharging and P5,000 for operators under Joint Administrative Order (JAO) 2014-01.

But Chiquito Obseo, vice-president of Metro Cebu Taxi Operators Association (MCTOA), is still hopeful they will get a favorable decision.

“I am not disappointed since our motion for reconsideration to get back the P40 flag down rate still has no resolution. We are still hopeful that the LTFRB will have a win-win solution regarding the matter,” he told Cebu Daily News.

The MCTOA is the only group from Cebu who joined other taxi operators across the country in the joint motion for reconsideration.

Meanwhile, the Cebu Provincial Board urged the LTFRB to recalibrate all taxi meters to avoid conflict between drivers and the passengers over the P10 fare reduction.

PB member Arleigh Jay Sitoy who authored the resolution cited the March 9 incident when a taxi driver was accused of poking a knife at his passengers who asked for a P10 rebate of their fare.

In another resolution which Sitoy also authored, the PB requested the Cebu Provincial Police Office (CPPO) to help in the investigation on the knife poking incident.

Sitoy said necessary sanctions, penalties and apprehension should be considered if proven that the taxi driver is found guilty.

The Land Transportation Office (LTO) is also urged to consider revoking the license of the taxi driver as such attitude destroys the image of all taxi drivers in the province.

This could also affect the livelihood of prudent drivers as commuters may be afraid to ride taxis as they may find it unsafe.

The cancellation of the driver’s license of the taxi driver would serve as an example to other ill-mannered taxi drivers.

The PB also asked the LTFRB to provide hotline numbers to accommodate those who was to complain against drivers who do not observe the implementation of the administrative order.