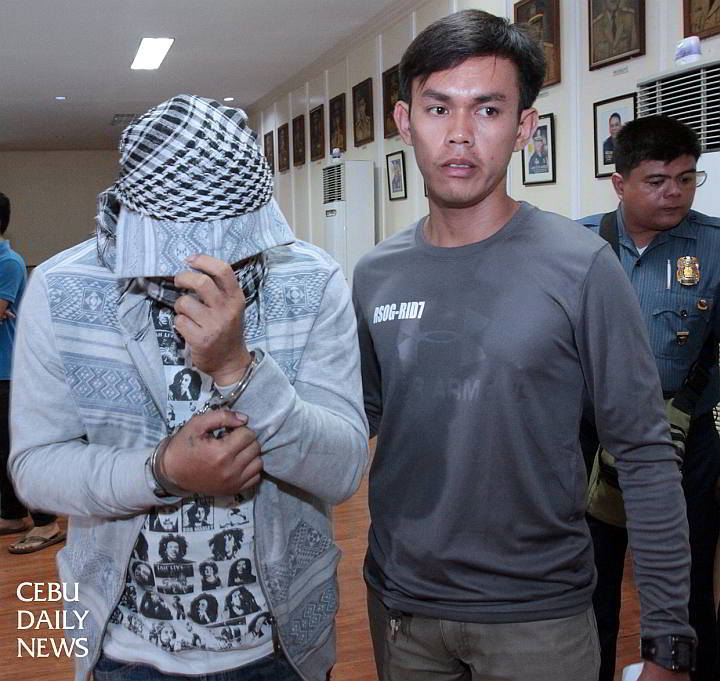 Mario Remetre (left), one of the suspects in the robbery of MyGold Jewelry Store in Colon Street, Cebu City, is escorted by a policeman at the Regional Special Operations Group office. (CDN PHOTO/JUNJIE MENDOZA)

Employees of MyGold pawnshop positively identified Mario Remitre as  one of the  four men who robbed them and fled with  the store’s  jewelry.

Aside from the employees, vendors outside the pawnshop in Colon Street also identified him, said Senior Supt. Paul Labra II, chief of Regional Intelligence Division (RID).

CCTV footage of the store’s security camera showed  Remitre  wearing a ball cap when he and his three companions robbed My Gold pawnshop on April 25 and was the one who carried the bag containing the loot.

Remitre, who was arrested in Zamboanga del Sur, admitted being a member of a robbery group from Mindanao.

He identified his companions as Yongyong, Danny Buta, and Sequil.

He  refused to comment when asked about his involvement in the My Gold heist but he told police he was willing to  cooperate with the investigation.

With this development, Labra said police  have strong case against Remitre, Michael Florida and two John Does.

Remitre, 42, a former security guard, was arrested by members of the Regional Special Operation Group (RSOG) by virtue of an arrest warrant for robbery issued by Judge Sucesa Arcamo.

Remitre was tagged  as one of the suspects in the Oro China robbery case in Tagbilaran City in 2012.

He was also tagged in the P1.9 million E-Bingo robbery in Mandaue City last March.