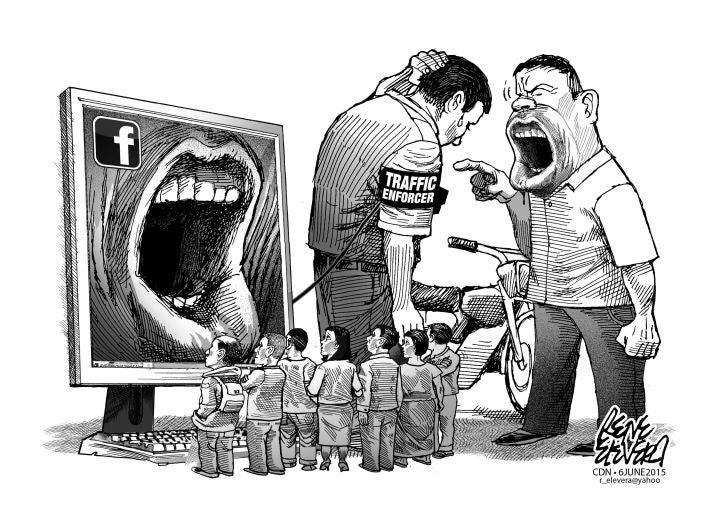 As someone who practically works as a public relations officer for the Association of Barangay Councils (ABC), Roger Cimafranca is expected to exert every effort to serve his clients.

He runs a program called “Kabarangayan” every Saturday and the persons who rode with him on his motorcycle when he was stopped by traffic enforcer Lyndon Lito Ocampo of the Cebu City Traffic Operations and Management (Citom) are also job-order workers of ABC. They wore blue shirts printed with the ABC logo.

As the principal violator, Cimafranca was accused of: 1) overloading when he transported two persons on a motorcycle; and 2) the two passengers didn’t wear crash helmets as required by both local and national laws.

Both carry a combined P2,500 fine – P500 for overloading and P2,000 for not wearing crash helmets. Whether he had no money at the time or he was just trying to weasel his way out of his obligations, Cimafranca tried to persuade Ocampo to give him a break and overlook his violations.

Unfortunately for him, Ocampo didn’t look the other way and Cimafranca made the very big mistake of insulting and threatening him by using his so-called media connections and connections with the ABC and Cebu City Mayor Michael Rama.

Unbeknownst to him — as he was too busy humiliating Ocampo in his own arrogant fashion — was Ocampo’s wise decision to use his camera phone that was safely tucked in his pocket to record on video his confrontation with Cimafranca.

As someone who claims to be from the media, Cimafranca should have been aware by now about the possibility of his shenanigans being caught on camera as the advances in technology have seen the proliferation of  models as compact  as a person’s average camera phone.

The footage itself as posted in Facebook didn’t clearly show Cimafranca’s face but it did record his voice which may be admissible as evidence in court should he go that far in contesting the indefinite suspension imposed on him by the ABC for his abusive behavior.

Then again, Cimafranca may not be in a position to do anything to prove his innocence against such glaring footage which ABC President Philip Zafra described as something “that speaks for itself.”

The incident, which may pale in comparison to other pressing issues of the day but had drawn more than 60,000 views in Facebook, is yet another sober reminder to people high and low in the social strata on how their behavior inside or outside their workplace and home will sooner or later find its way through the ever prying eyes of social media.

Circumspection and discretion is the better part of valor or simply put, people should be responsible enough to own up to and deal with their mistakes lest they find themselves the object of outrage and disgust from the growing social media community.