No way but up for UP 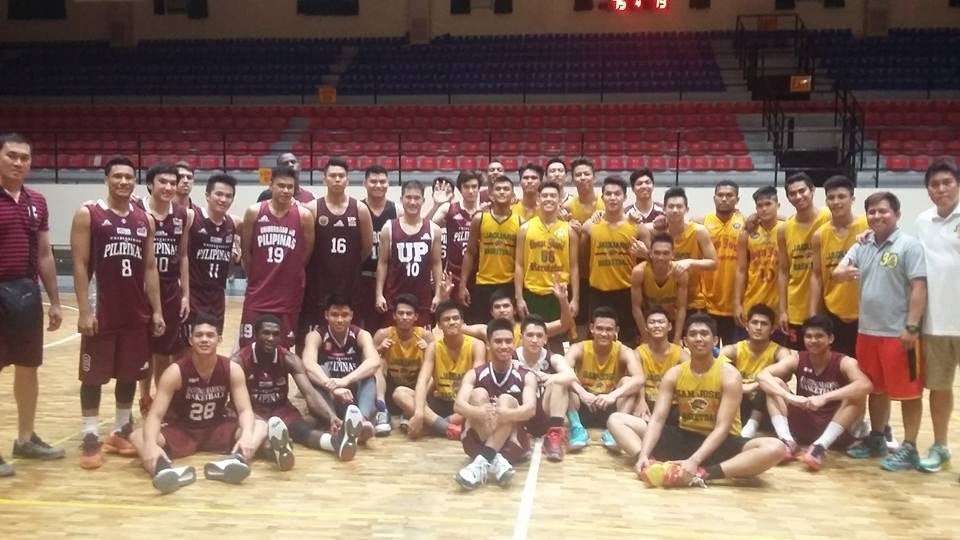 THE UP Fighting Maroons pose with the USJ-R Jaguars after their recent tune-up game.

Has the long-suffering University of the Philippines (UP) Fighting Maroons finally found the recipe for success that has long eluded them heading to the upcoming UAAP Season 78?

Coaches and players alike certainly believe that they have after coming away with two victories in four games against the top collegiate squads during their recent sojourn here.

And though the Maroons remain to be a work in progress in the months to come before the UAAP opens in September, acting head coach Joe Ward believes the path to respectability is made easier through discipline.

“I can’t speak for what happened inside the team last year. I cannot comment on that since I was an outsider looking in. But when I took over, I realized that this team lacked control. Now, these college kids may not admit it but they like to be disciplined.

They need it, not just on the court but off it as well,” said Ward, the former conditioning and skills coach of Ginebra who was brought in to man the squad after former head coach Rey Madrid stepped down from his position last year.

After finishing Season 77 with just a win to show in 14 games, the Maroons believe they have no way to go but up.

And it seems like they are heading in that direction after winning the inaugural championship in the Filsports Basketball Association, a regional grassroots league. In the finals, they beat the top-seeded Pampanga-Foton Tornadoes, a team that won all but one game before the fateful championship duel.

According to assistant coach Moriah Gingerich, the victory gave the squad a taste of what’s it like to be on top – a refreshing change from the years they’ve spent at the bottom of the collegiate league. In the last three years, the Maroons have won a grand total of two games while losing a whopping 40.

“The championship in the FBA was a crucial one because you can feel the positive vibe now emanating from this squad,” said Gingerich who was part of the UP squad that came over to Cebu and play in the Cesafi Partner’s Cup a few years back.

If the Maroons are to break through in the UAAP this season, Cebuano guard Paul Desiderio is expected to play a huge role. It helps that the former Cesafi juniors MVP has completely bought in to the philosophy that the new coaching staff composed of Allan Gregorio and former PBA player Poch Juinio has implemented.

“I would say that we have improved a lot in terms of discipline. We are more disciplined and we have been putting more effort in our work than before,” said Desiderio who missed all of last season because of his duties to the Philippine national youth team.

But in order to make the turn from good to great, Desiderio believes that they still have more work to do, especially with their play in crunch time.
“The team needs to improve on consistency. Basically, more on closing out games,” he added.