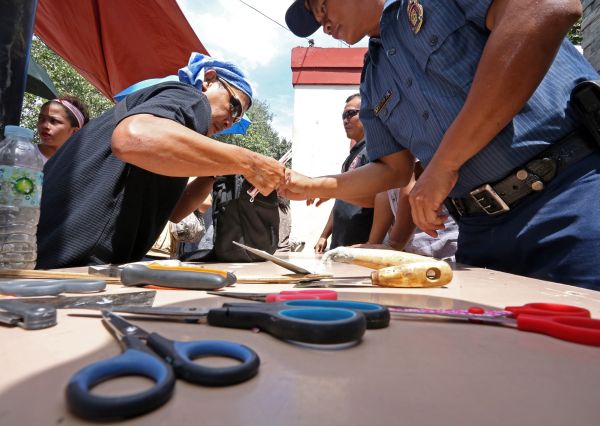 Cebu City Police confiscated sharp objects including scissors and knives and a replica of a toy gun in the cemeteries. (CDN PHOTO/LITO TECSON)

AT LEAST 65,000 people trooped to Cebu City cemeteries yesterday, All Saints’ Day, to visit their departed loved ones.

Senior Supt. Marciano Batiancela Jr., acting Cebu City police chief, said there were no reports of pickpocketing and theft, and the visiting public has become more cooperative in following the do’s and don’ts inside the cemetery.

Police confiscated only four knives and a replica of a toy gun in the cemeteries yesterday morning.

“It’s generally peaceful. In the morning, I made rounds in the cemeteries of Carreta, Golden Haven and Queen City Memorial Garden. We observed that the crowd is still less as individuals would start coming in the afternoon and night. We have to implement stricter security measures then,” he said.

Cebu City officials also reported a peaceful and orderly observance of All Saints’ Day, except for a few traffic changes.

City Councilor Dave Tumulak, who heads the city’s Command Control Center (C3), said as of 6 p.m. yesterday, there have been no reported untoward incidents in the city’s cemeteries.

The changes involved creating a loop in V. Rama to ease the traffic in B. Rodriguez. The street leading to Guadalupe was made into a one-way street.

A two-way flow was done along A. Soriano Aven near the Queen City Garden cemetery.